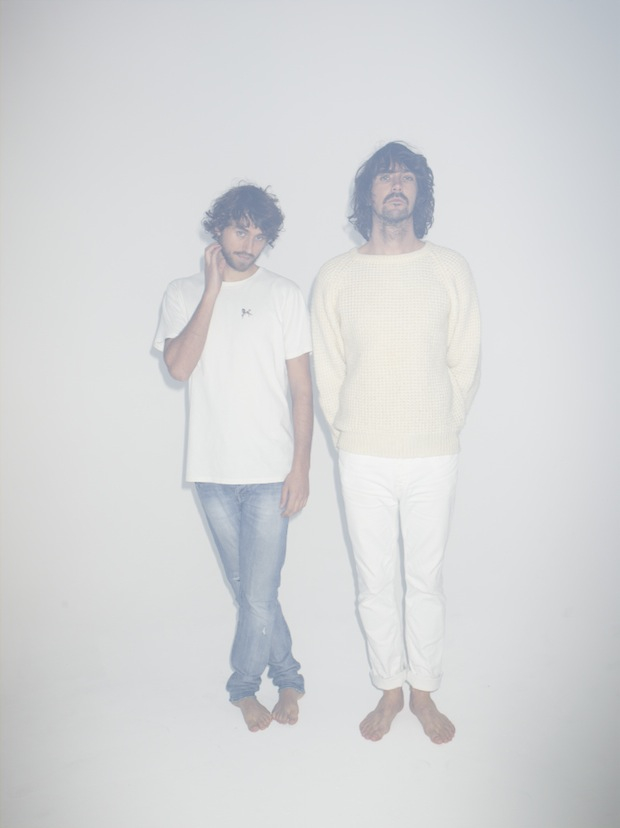 While most sites are happy streaming a record and leaving it at that, self-titled prefers sharing the stories behind the songs with our Free Association features. Canyons first told us about their debut album two summers ago, when Leo Thomson promised, “It’s going to be put together thoughtfully, in a way that makes it coherent–not just a collection of dance tracks. Our goal is to write an album that makes sense when you listen to it from start to finish and to create something we’re proud of in terms of the whole aesthetic of the project. We’re playing a bunch of [live] stuff on it, and we’ve also got a few friends and vocalists that we’re doing sessions with.”

As you’re about to hear, all of the above comes true on Keep Your Dreams, from its live wire loops and seamless sequencing to the helpful hands and hooks of special guests from Nite Jewel, Tame Impala and more. Make sense of it all alongside the duo’s exclusive track-by-track breakdown below…

1. Circadia
We like the idea of our music existing in some strange other world. “Circadia,” to us, evokes a feeling like you’re entering another realm. We always wanted to have something kind of atmospheric and swirling as the first piece of music on the album, so pretty soon after making this we figured it would probably go first.

2. Under a Blue Sky
We wrote this fairly late in the [recording process]. I think we felt like the album could use a bit more frantic energy, and also something with a bit of an odd arrangement. This is what we ended up with. We really enjoy exploring the possibilities that come from combining live instrumentation with programmed and sequenced sounds. We were hoping to achieve one of those listening experiences where you sort of get sucked in and have no idea where something is headed and then all of a sudden it’s over and you’re not really sure what happened. A bit like diving head first into one of those twisty tube water slide things.

3. My Rescue
This was one of those songs that came together pretty quickly and spontaneously. Neither of us were feeling very inspired and so we were just messing with some sounds in our studio. I sequenced a really repetitive synth line on our Sequential Circuits Pro-One and then ran it through this phase-shifter pedal and both of our ears pricked up because it started to sound pretty cool. We left it playing and jammed some chords over the top of it, Ryan got some drums happening and that’s pretty much how the song came about. We started writing the lyrics and when Nick Allbrook (Pond, Tame Impala) was in town for the day we managed to coax him up to BJB Studio–which sadly no longer exists–to record the vocal take. We finished writing the lyrics while the engineer was setting up the mic.

4. See Blind Through
We initially got in touch with Ramona Gonzalez (Nite Jewel) to sing on a totally different bit of music. She sent the vocal take back to us and although it was really good, it wasn’t quite working with the track. I think maybe we realized that what we were originally going for wasn’t actually going to work. We abandoned ship temporarily. A little while later we started working on the music that became “See Blind Through” because we’d wanted to write a really slow house tune for a while. We realized if we pitched Ramona’s vocals down they sounded pretty damn cool. I think initially we were only going to use snippets of the pitched down vocal but then all of it ended up sounding good and it actually tied the song together.

5. Sun And Moon
Nick Allbrook was up at our studio while he was in town and he was keen for us to to try write something new together, as opposed to us just having him sing on something Ryan and I had already written. We started jamming and he started singing the lyrics off the top of his head. The song actually ended up taking quite a while to finish but the bones of it were written really quickly. The vocal take that ended up on the album was initially just a quick demo that we recorded so Nick would remember what he was singing. We ended up keeping it; although there’s the odd bum note, it adds a charm to the song that would otherwise not be there if we re-recorded the vocal.

6. The Bridge
With this jam we really wanted to create that loose vibe that comes from recording long takes without creating loops, which often happens with more electronic based music. We tried to capture the looseness of some of the psychedelic music we enjoy but using really obvious electronic instruments. Ryan was messing with the 606 and I was playing the Polysix and we just recorded a long take of us jamming together, which we used as the foundation and then added a few bits and pieces over the top. The weird vocal sounds are a sample from the Bob Markley album A Group that we ran through a tremolo pedal.

7. Blue Snakes
We made this quite a while ago. It was originally released on Cosmo Vitelli’s fine label Im a Cliche, on 12″ and as part of the Moments of a Crisis compilation. Although we hadn’t started on our album yet we did think that maybe “Blue Snakes” would end up on there. But at the same time, we didn’t really know what our album was going to sound like and if the track would actually fit on there at all. We made a bunch of playlists while we were deciding on what songs would make the album and we pulled “Blue Snakes” into one of them and it just worked. Cosmo Vitelli was kind enough to license the track back to us so we could include it on the album.

8. Tonight
This song came about when we were both into the idea of getting something really simple, short and to the point on the album, probably because a lot of our songs end up being pretty long. Ryan was up at our studio by himself and messing around with a vocoder and some music and wrote this one really quickly. We sent the track to Kev and he re-sung the vocoder harmonies and the lead vocal. I played a little bit of Wurlitzer on there, we tweaked the arrangement a tiny bit and the song was done. We had to re-record a coupe of things when it came to mixing the tune because there was a lot of noise in the bass which normally we’d be fine with but it was hindering us from getting the sound we wanted.

9. When I See You Again
I think I came up with the piano chords for this while we were working on a remix for Tame Impala. We both decided that the chords were cool and we should use them for one of our own songs instead. I guess it’s kinda funny that Kevin and [Tame Impala guitarist/keyboardist] Dom [Simper] both ended up playing on the song it turned into. We developed the music pretty quickly for this song but then couldn’t work out who we wanted to sing on it so it sat around for a while. Originally Robert Smith was going to sing on it–we sent him the track and the lyrics and he was into it, but then didn’t end up getting time and we needed to keep moving so we had to think of someone else. Ryan had been listening to Sniff ‘n’ the Tears and thought we should try get in touch with their singer, Paul Roberts. We E-mailed him the music and he got back to us within a few hours. We sent him the lyrics which he made a few adjustments to, he recorded the vocals and the song was pretty much done.

10. And We Dance
This song has really been a lot of different songs. We had a completely different version which we thought was the final version of the song; to the point where we spent two days trying to mix it, couldn’t get it sounding right and realized the problem was in the music not the mix and that we actually needed to completely change it around. We tried a few different things but couldn’t really figure out what to do. What we wanted though was something that was repetitive and hypnotic, to complement the lyrics and what the song is about. I was experimenting with a couple of things and ran the 606 through our little Sansamp and got this cool overdriven sound. Then I started messing around with the bass and some organ and felt like the song was finally starting to feel right. We went into BJB studio and Ryan played a bunch live toms over the music. Then we got our go-to-guy for saxophone, Matt Keegan, to come in and play over the top. We explained what we wanted and he played all these crazy harmonies and then a solo that really rounded out the vibe we were going for.

11. Land In Between
This song was quite inspired by Brian Eno, and also David Bowie’s album Low. Initially it had a programmed Linndrum beat but as we developed the music and the vibe we realiszd that we needed to strip the drums right back. Ryan and I are both fans of the Embassy so we thought we’d get in touch with the singer Fredrik Lindson to see if he might want to sing on it. He was super cool to work with; we sent him the music and lyrics and he recorded it straight away. We asked him if he could change a couple of things and he sent us the revised vocal take the next day I think. We recorded the Hammond at our friend’s studio, and the trumpet was recorded quite a while ago in New York at Prince Language’s studio when we were out there for the DFA 12” [Fire Eyes]. We never ended up using it for the intended song so we pulled it into “Land in Between” and it fit really well.