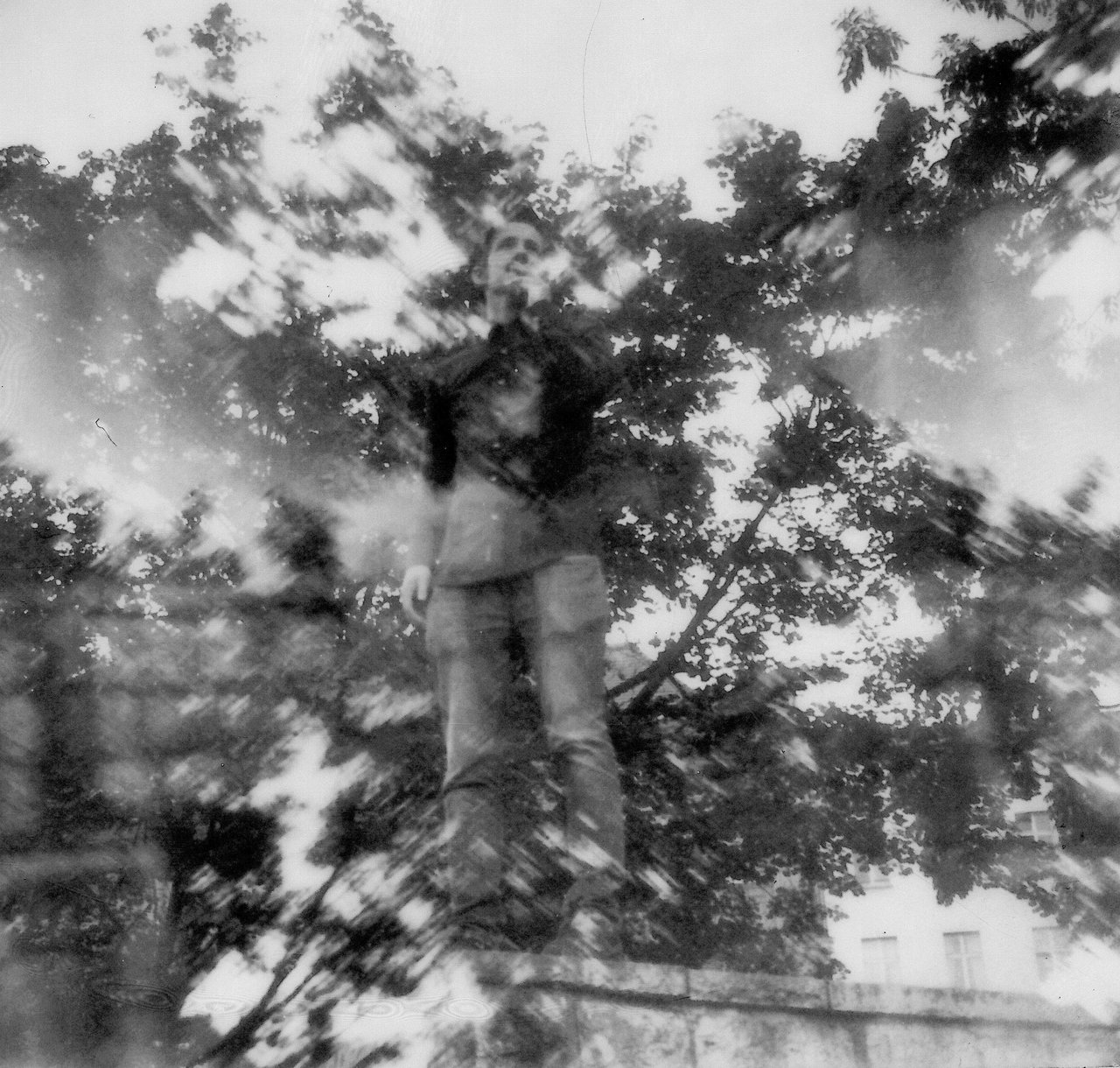 “The last month of 2014 and first half of this year were not kind to me and my family to say the least,” explains Scott Monteith, better known as the dubby beatician Deadbeat. “We lost my father-in-law in an accident in December which was just devastating. This was closely proceeded by several months of business-related woes, which sent me into a truly dire period of existential crisis and depression.

He continues, “Of course, this all happened during a time when it seemed the wider world was falling apart at the seams no matter where you looked. I honestly can’t remember a moment in my life previously when the simple act of picking up and reading a newspaper was such a potentially day ruining prospect. Thankfully I was able to turn to music and writing to work through those feelings over the last year, and found some absolutely lovely people to voice them when I wasn’t up to the task of expressing them myself.”

Presenting the story behind every song on Walls & Dimensions, along with an exclusive stream of the entire affair before its official release this Friday on Monteith’s own BLKRTZ imprint…

“AIN’T NO MORE FLOWERS” (FEAT. FINK)
Everyone has their bad days, bad weeks, bad months and as time goes on and we get older, even bad years. For me 2015 definitely qualified as such. I’m a fairly positive person for the most part, and individual disappointments and hardships have never been something that I’ve allowed myself to dwell on or hold unnecessary sway over my day-to-day life. There is a different kind of sorrow which I learned about this year though—one which stems not from any single earth-shattering event, but from the cumulative effects of a thousand tiny pin pricks slowly but surely bleeding your confidence until you question whether you really truly had any in the first place. I wrote the lyrics to this song from that place and trying to rid myself of that sense of hopelessness through using more global or universal themes. It wasn’t just that I was fucked; it’s that the whole world and everyone in it was fucked. I tried to sing it many times myself and was never happy with the results. I was out for a beer with Fin one day and he said he would be willing to give it a try. I couldn’t be happier with the results. His performance is true, heartwrenching blues of the highest order.

“I GET LOW”
The lyric for this track has been in my mind for a number of years, though it was originally intended as some kind of looping Chicago-style jack thing that would have been spoken and processed. After the aforementioned events of last year, I decided to try it sung in a more sorrowful context. I sang the line as a place holder, intending to give it to someone else, but forgot to remove it during a sound check when I and Tikiman were in Japan last year. He said he thought it was very strong as it was and encouraged me to keep my own voice in the song. I also sang on the track I did for Ostgut Ton last year, “Woah!”, but that was much more heavily processed. It’s nerve-racking to put your voice on record for the first time in all its naked glory but the feedback thus far has been very positive.

“RAGE AGAINST THE LIGHT” (FEAT. DELHIA DE FRANCE)
Ever since I started going to clubs and raves in my teens, that environment has served a dual purpose for me. There is the positive, elated side of listening to and playing music for other people and the wonderful opportunities and friendships that it has brought over the years. For better or worse, it has also served a darker function as the place I’ve escaped to when other things in my life were weighing heavy on me. The lyrics are an alteration—some critics might rather say perversion—of a Dylan Thomas poem repurposed to describe that feeling of not wanting the night to end and the inevitable flooding in of reality that comes with the morning. I think Delhia’s vocals really captured that emotion beautifully.

“TIRED PEOPLE GET UP”
During the Baltimore riots last year I happened upon the YouTube channel of Sebastian Bonet, an incredibly talented artist who has also posted a variety of social commentary monologues on various issues. I was so struck by his discussion of the issues at the root of the riots that I reached out to him to see if he would be okay with me using all or a part of it for a track for the album. I spent several days editing the sound file trying to find a way of preserving the passion and rage he expressed while trying to remove it from its specific time and place and offer a more universal message. I sent him the track when I was finished and he was equally happy with the results and kindly gave me his blessing to use it on the album. “STEKKER FOREVER!” (FEAT. MAARTEN)
In July I was invited to do a weeklong residency in Utrecht as part of the Studio Stekker festival alongside a truly mind-bogglingly good list of other artists. It’s a unique experience as it offers a full week—24 hours a day if you want—to think about nothing but music in one of the best equipped studios I’ve ever seen. Regardless of how obscure a piece of gear you might need, if they don’t have it on hand they can find it for you. I was pretty far into the album writing process when I arrived there and set the goal for myself of trying to finish it over the course of that week. I was really struggling with this particular track and by mid-week had pretty much decided I needed to scrap it and write something new. That night I met Maarten Vos and he mentioned he was a cello player. We spent a night recording cello parts on the gorgeous SSL mixing console there. I had never used one though; thankfully the one and only Howie B was there to lend us a hand. You can hear Howie cheering and laughing at the midway point in the track, as we all were after the last take at 5 in the morning.

“KEEP ON PUSHING”
This track starts with a mock interview with me that is meant to mark a turning point in the album, and was composed at a pretty crucial turning point for me creatively and emotionally. It can be very difficult to see through the darkest moments of our lives, to keep pushing even though the results of doing so aren’t immediately apparent. Much as the thousand tiny pin pricks resulting in the sorrow that began this process, the act of making what might seem insignificant positive decisions ultimately start to add up and provide some, if not quite happiness, at least hope.

“GOT TO CARRY ON” (FEAT. ELIF BICER)
This started out as an instrumental, but when it was nearly done, it left me with the strong feeling that it was quite top-heavy. The vocal tracks which start things were all very strong and I felt I needed something at the end to balance things out. Elif is a dear friend of mine who knows a thing or two about life’s ups and downs as well. I called her one afternoon and explained my predicament. She came by a few hours later and we sat down and worked out the lyrics—a few simple lines which hopefully convey that sense of hope I felt as so important to include in the album’s closing. She has an beautiful voice, and is an incredibly confident and focused studio partner and she absolutely nailed this—harmonies and all—in two takes that same afternoon.

“LIGHTS FOR LELE”
From November of last year to early February, I went with my family to Chile, where my wife is from. As I knew I wasn’t going to have access to a studio while I was there I decided to get back to my roots musically in a way and just use field recordings and some of my favourite granular synthesis software to spend a little part of each day making ambient sounds with no consideration for what they might ultimately be used for. I did this every morning and it affectionately became known around the house as the daily drone. A few weeks into our trip my father-in-law was hit by a car on his bike and was killed. This event very quickly added a new level of gravitas to my morning drone exercises. It was the one moment of complete solitude I had in the day to process my own emotions so that I could be an effective support for my wife, 4-year-old daughter and extended family. In many ways this piece is the foundation that the entire album is built on. Samples from those exercises feature on every track of the album in one form or another. As such it felt like a very appropriate way to end things.