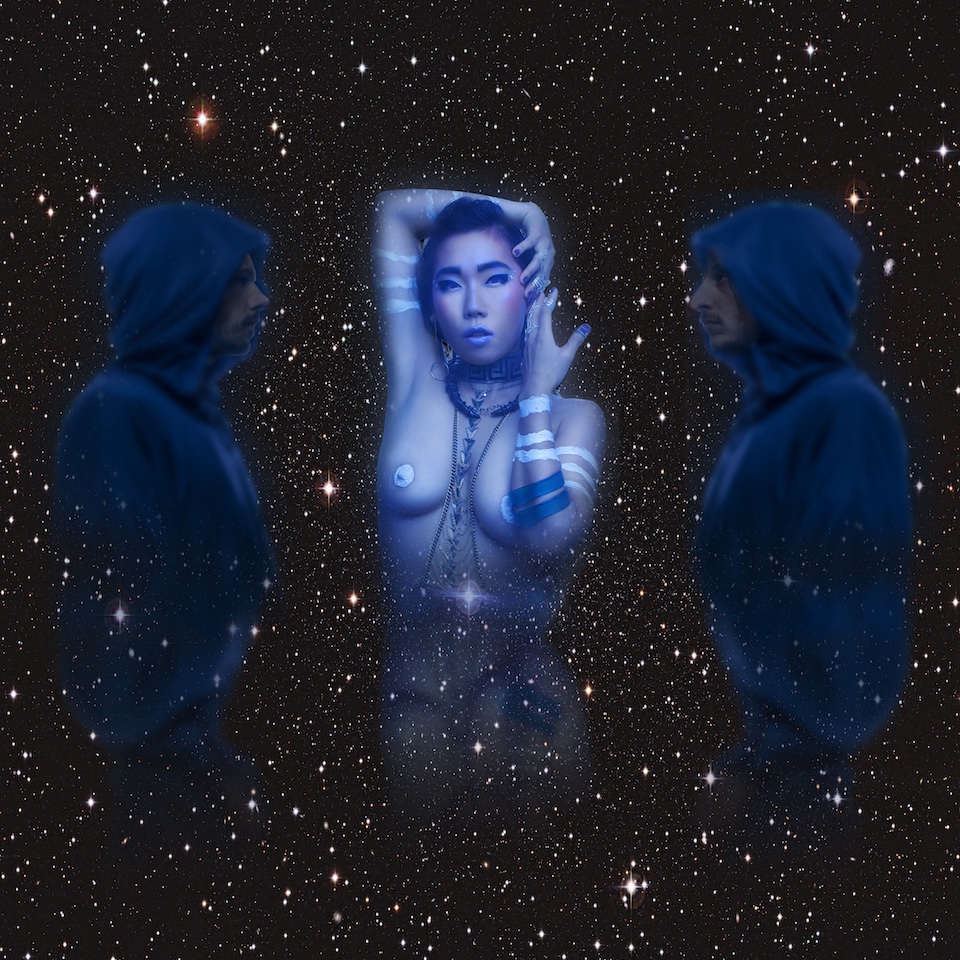 Considering their deep connections to Brooklyn’s underground rave scene, it’s no surprise that DUST’s long-awaited debut album sounds like the sort of thing you’d expect to hear blasting through a Bossa Nova Civic Club speaker at 3 a.m. It’s more than just a mere rave-on revival, though; with a frantic sci-fi storyline in place, and Greem Jellyfish singing/screaming/speaking over the live wire loops and laser-guided synth lines of Michael Sherburn and John Barclay, it’s more like a low-budget movie that’s been stripped of its abstract visuals.

“Every release is a little bit of poking fun at itself,” Barclay explained in a recent PAPER interview, “but at the same time taking it pretty seriously. I think this is just another one of those vibes, or something we went through during a period of time. I don’t think the next record is going to be exactly the same, or even the same genre.”

In the following exclusive, we unveil Agony Planet in full alongside a complete track-by-track commentary. Look out for its official LP pressing tomorrow through 2MR.

“BREEDING PIT”
Michael Sherburn: I brought a laptop with some basic recording gear last time we toured Europe. John and I purchased these awful computer speakers for like 10 Euro, and were using this setup during down time between shows. It sets the mood of the album to me. During a Sunday morning session at Berghain tripping on mushrooms I was standing by the lighting guy and looked down on the crowd. Everyone was in this alien trance dance with their shirts off and looked like a bunch of maggots. Then this beam of light came down like it was going to abduct everyone on the dance floor. So I went back to our flat and came up with the main parts of this track.
Greem Jellyfish: When I say, “come deeper, smash harder,” I’m telling a sickness in my own stomach to destroy myself. It is a cathartic experience, just like when Michael showed me a video clip of thousands of maggot moving together on top of each others. It didn’t only give me chill and made my stomach ill to watch them but also it shockingly touched somewhere inside of me. I imagined myself being sick in a spaceship with Mike and John, having a bad stomach ache, feeling the epitome of puke and disgust. My stomach filled with layers of food poisoning ingredients such as raw mushrooms. It’s total nauseating.

“ALIEN PREY”
Michael: This track was written in our DUMBO studio. I recorded it in one take using an old techno rack unit and a Roland XP-30 running it all through a tape delay unit and a reverb pedal. This song just reminds me of how we could barely mix because we had a space next to Interpol and they were so fucking loud. Always imagined the sound of an alien speaking through this track; perhaps I was channeling something beyond this realm.

“XENOCIDE”
John Barclay: This song is what I imagine might accompany Catholic mass for a sinister alien race.

“THE ALIEN IS CONTRACTING”
Michael: This is the ambient version of a song I wrote in 2013 after our first European tour. We then had Greem come in and record the vocals.
Greem: Insanity is the key of this song story. I am the alien and the discomfort of being myself confuses my own world. My head is cracked open to receive new information from the outer space. However, it gives me a bad headaches. I also feel my whole body falling deeply falling down under the floor as if the gravity is melting. I’m feeling nauseous and can’t breathe. I feel my nose bleed so as my friend Jennifer’s nose bleed. The alien is contracting, making an arrangement with the agony. Still feeling sick and nauseous, my skin leather is falling like the gravity is melting while I’m looking for a rescue.

“TELL ME”
Michael: “Tell Me” was inspired by late ’80s/early ’90s acid-house. I originally did the vocals myself and used a vocoder. We decided to use it for this record and had Greem redo the vocals.
Greem: It’s one of my favorite songs that Mike wrote. I love to sing “Tell Me” because it’s catchy, simple, sexy and sinister. The lyrics go, “Tell me your fantasy/ Tell me your dream/ Tell me your deepest darkest fear.”

“KOLOBOS”
Michael: This song was also written in our DUMBO studio after we got back from our first Europe circuit. I was heavily inspired by the techno scene in Berlin, especially the club Berghain. Always pictured this song playing in some type of blood rave scenario.
Greem: DUST used to practice at a basement studio in DUMBO. We often practiced with the lights off so we could feel the music. I imagined myself in the warm, dark and golden jungle and sang like a Tarzan.

“THE BURNING”
Michael: The first part of this track comes from a conceptual ambient record I made in 2011. The latter was also recorded in Berlin during our downtime between shows.

“MESSAGE FROM ENOCH”
Michael: This track uses a Moog modular that is probably my favorite synth ever. It always makes me think about some type of chase scene, kinda like the one from Return of the Jedi where the storm troopers are chasing them through the forest of Endor. There was a period of time where the bar we work at, Bossa Nova Civic Club, was closed for renovations and that spawned a lot of darker tracks like this one.

“WASTELAND”
Michael: This track was made over a period of three weeks. I designed a few sounds and then tried to arrange them like a dub track. Fond memory of walking in a blizzard listening to this with no one on the streets. Bushwick looked a lot like the town from Silent Hill—like a post-apocalyptic city in ruins.

“SHE WOKE UP IN WATER”
Michael: This track was also written in our DUMBO studio after I got back from Europe. It was recorded in one take but then manipulated over the years. Finally John and I sat down with it and got Greem to write lyrics.
Greem: Mike, John and I recorded my first vocal track for the song at the basement of Bossa Nova. I didn’t have the lyrics yet. They brought a track that they had been working on. I centered myself into a deep darkness of my nightmare. I sang and screamed. I felt like I was [possessed] by a spirit for the moment. I mainly created melody and the mood at that time, not the lyrics. With the recorded sound, Mike and John polished into structured song. Then I wrote lyrics listening to my own voice, imaging what I said and sculpting it into a story I could show.

When I was writing the lyrics, I was inspired by a mother waking up in the spaceship and group of angry people rising above. I added the Korean lyrical sound of grunting and screaming.

“ACID BATH”
Michael: This track is my favorite track on this album. It has three TB-303 acid lines that go in and out of the song. Heavily inspired by the late ’90s Euro-acid/trance tracks.

“HELLBOUND”
Michael: This track was really fun to make. We probably have five or six versions of it. John picked the final one and we trimmed off a considerable amount of extra drums. I always got such a sleazy vibe from this track. Used primarily a pulse bass with a heavily compressed TR-707 and filtered TR-909 drum machine. This is the ‘credits’ song for the end of a film which only seemed natural to be at the end of the record.