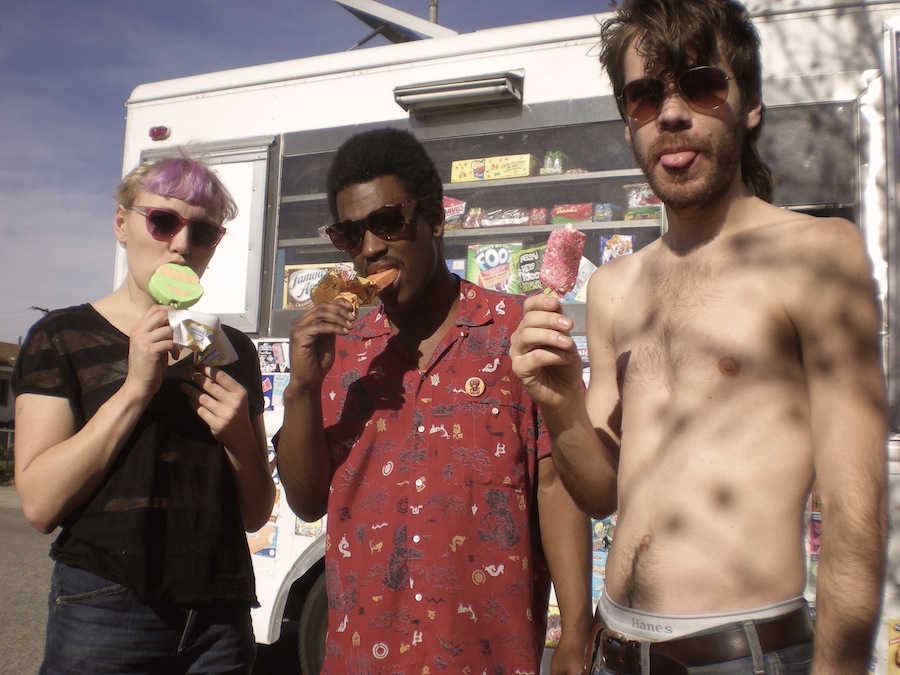 With a name like Guantanamo Baywatch slapped across Chest Crawl‘s midnight movie sleeve, we didn’t waste any time wondering if the Portland band’s second album was worth a spin. We simply dropped our needle down and were rewarded with yet another Dirtnap-endorsed slab of endearingly sloppy rock ‘n’ roll–one that rides a killer wave of scorched riffs, wobbly rhythms and diabolical Dick Dale hooks.

Have a listen down below, right alongside the rather hilarious track-by-track commentary of frontman Jason Powell… If you’re ever playing a song live, and there are some assholes sitting in some booth talking, not paying attention, put the big orgasmic ending on the end of the song, and they”ll clap.

Some dude from Spain just Facebooked us and was asking for the lyrics to our album. I started writing them down for this guy, and stopped halfway through ‘cuz all the lyrics are so retarded. Sorry Spanish dude.

At first this was a total throwaway song that I wrote in a day for this comp 7” and hated. We showed up at the recording place and our drummer, Chris, had never even heard it. We did it in like a take. Wrote the lyrics probably five seconds before we recorded it while the sound guy set up the mics. Now it’s my favorite song we do, so we re-recorded it and put it on the album.

Our first show with Chris was this big weird performance art festival in PDX called TBA.  I can’t believe we made him–or he agreed to–play this as his first show ‘cuz it was a real big stage/sound system and there were shit tons of people. This was the first song we wrote with him, and we played it that night. It also has a long jammy intro that none of us can remember how to play, so it didn’t show up on the record. (Or at any show ever either.)

I was listening to a lot of Annette probably. There are some bird sound effects in it somewhere. This is like one of those D rate Elvis movie songs–our version of “Yoga is as Yoga does.”

I always try to convince people that the intro to this is from “Israelites” by Desmond Dekker, but i think it’s probably just a Hunx rip off.

A cover of the Conway Twitty cover of a Paul Anka song.

Whenever we start playing a new song, there are never any titles for it except something like ‘that new song’ or ‘fuzzy fart song’ or ‘Beatle juice’ or something like that–whatever our bassist Chevelle thinks it sounds like so she can remember it. She thought this one sounded like a baseball song (I don’t even know what that means) so she called it “Base Ball,” but I fucking hated that name, so Chris tried to pull out some lyrics from it to name the song. At no point do I say “baby please” in it though.

Nike just used an old version of this song in some kind of skateboard commercial, and the 13-year-old me was so stoked. When it finally came out, they edited it down so all that played was the opening chord in the last half second of the video. Was bummed.

I wrote this song like a day before the album had to get mastered, so we didn’t have time to learn it. I just played all the parts.  By that, I mean every single drum thing was recorded separately on a different track. That’s why it sounds like that. I just really wanted it on the album.