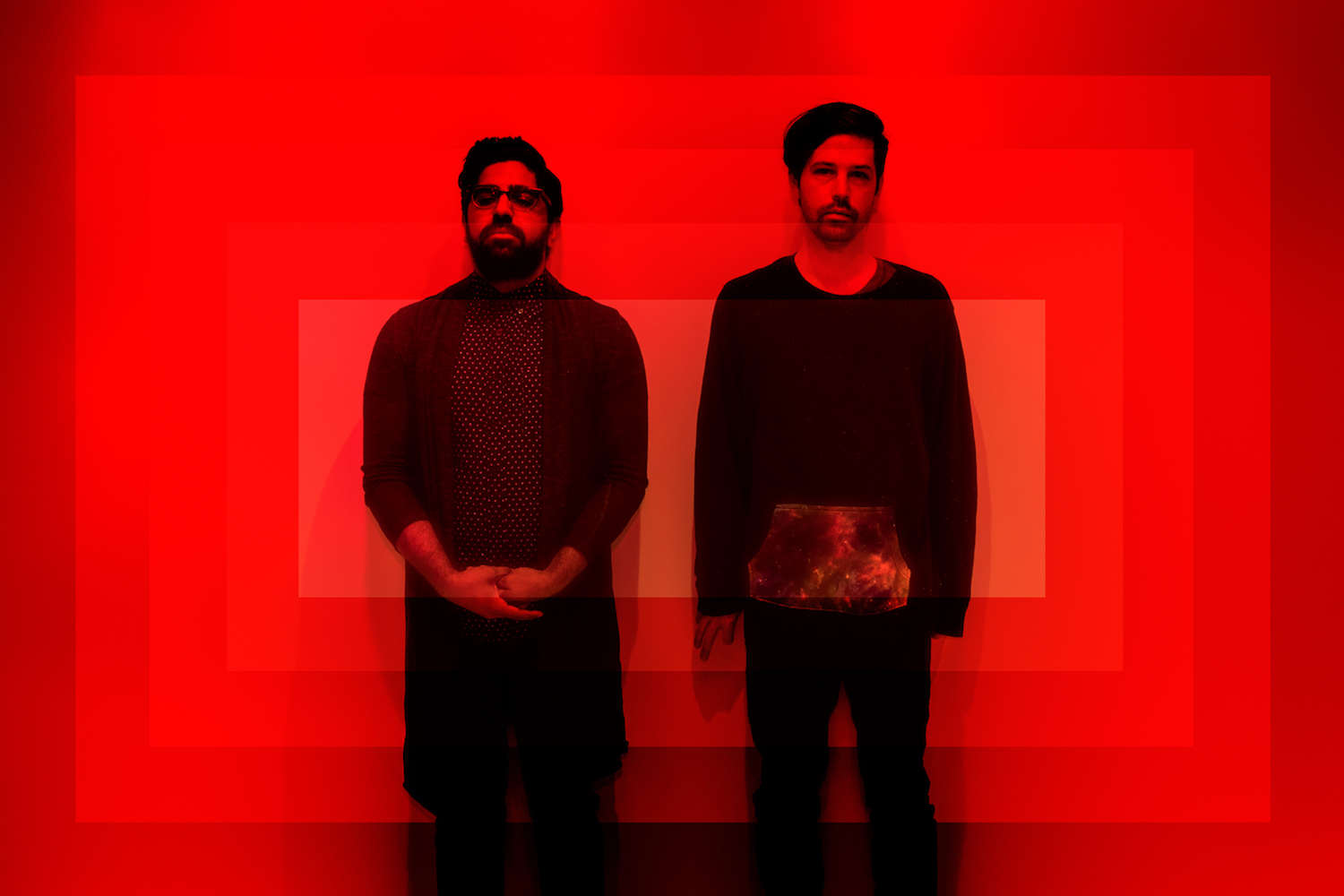 Not content with simply wrapping a new record after a six-year break, HDLSS go the full-on concept album route on Selections From DUMB. They also wrote, recorded and mastered a killer Heems collab within hours of its final deadline. While we’d love to peel the LP’s many lyrical and musical layers back for you, we’d rather let the Brooklyn duo be your guides instead, starting with some of its central themes….

“Most of this record is us subverting genres of music,” the pair explained over email, “and utilizing their forms to help tell a story. Genre as a form of communication and the lyrics are often delivered from the perspective of a narrator, an outside viewpoint.”

Here’s a closer look from every angle—a track-by-track commentary not unlike all the DVDs collecting dust in the corner of your living room—along with an early stream of the entire record, which drops on the group’s own label tomorrow…. “COLONIZER”
“Colonizer” is about appropriation, both cultural and mental, so we used those tropical themes that are so popular in white pop music right now to reinforce that idea. There is also a Toni Morrison sample about losing your identity, and a nod to Steve Reich’s minimalist compositions in the opening marimba part to reinforce the idea of loss of meaning in our post-modern society.

“BYSTANDER EFFECT”
This song has an interesting structure. It starts out as a pseudo hip-hop beat, and quickly devolves into a noisy instrumental horn section before finally falling apart into a beautiful string section, rebuilding itself and giving hope. This song is from the perspective of someone who only thinks of themselves; if they would see someone being assaulted on the street, they would just walk by and know that they too suffer from other’s apathy towards them. “WHAT COMES NEXT?”
Again, us subverting genre to tell a story; this time with dance and minimalist composition. This song is about the incongruities of being a Muslim in America. This song is a bit scary to put out there, as it has maybe the most personal lyrics on the record. It’s about adolescent stages of denial of origins in order to assimilate to American culture. And realizing in adulthood that as a result American anti-spirituality exists within and is a source of depression. I also wanted to investigate how things do or do not get passed down generationally, and what responsibility first-gen Americans really have in order to mitigate damage that inevitably gets inherited in diasporic communities. Like white superiority complexes inherited from living in colonial/post-colonial societies, or when the oppressed identify more with the oppressor. As a brown person that is immediately politicized because of my skin, the question of responsibility to represent a culture is heavy. The song asks, “What comes next? How do we reconcile these dual identities?”

On a lighter note, our favorite part of the song is when the horns in the bridge turn into vocal stabs as the verse starts and this classic sounding bass synth kicks in. Very satisfying.

“BILL$”
This was the first song we wrote for this record. It’s about feeling that you owe something, to yourself and others, starting over, reinventing yourself, and using music to facilitate it. Music is a powerful tool to do all sorts of things, and one of the best things it does is bring people together. The style of this song is a sort of faux-trap/post-rock sound—melancholic but hopeful overall. You believe the voice has the power to redeem itself even sounding as fragile as it is.

“I READ YOUR NOTE”
Here we use dance music again as a tool to explore social problems. This time isolation, depression, hopelessness. The chorus is “You should know I can’t love you” repeated over and over. Throughout the song we use a sample of an acapella of Madonna’s “Get Into the Groove”, which is a classic meaningless dance song, and use that meaninglessness to reinforce the sense of hopelessness of the narrator. If you’re depressed, what could be more meaningless than dance music? “WONDERLOSS”
In this song we use ’60s pop tropes to make the listener feel the naive hopefulness of that era’s popular culture. This song is again about the opposite concept of the traditional association with the genre it’s in; a total loss of wonder at the world, losing your child-like amazement at simple beauty. A juxtaposition similar to whats explored in David Lynch’s Blue Velvet. Making the opposite style of music as what we are talking about wasn’t a conscious decision, it just unfolded that way. It’s a really interesting effect to contradict yourself, but at the same time enhance the meaning even more through that contradiction.

“HELLBOY / PUPPET”
This began as an old composition written by a narrator in the depths of addiction. Feeling that darkness right in front of you, no veil between you and oblivion, and as you’re about to cross that threshold Nina Simone’s voice interrupts and says, “the things I used to like/ I don’t like anymore/ I want a lot of other things I’ve never had before/ I’m as jumpy as a puppet on a string.” The puppeteer is the drug that possesses the user just like the hellboy does in the throes of using. All of sudden the interests you had are no longer appealing, and the things you want all revolve around the novel, the euphoric, the instantly gratifying, the endless bottomless pit of the void in your stomach where you confront the devil, red eyes to red eyes. The dark part of your brain. “FALSE FLAG”
Here again we use naive ’60s pop tropes to subvert/enhance another idea—the fleeting nature of truth. The narrator states “I’m half awake in my third eye/ A grave mistake that I normalize”, but ultimately decides that we have our own sense of truth, and that is the only thing we can truly know. It’s also about how conspiracy theories/false flags are helpful to consider, because it isn’t necessarily important whether they’re true, but rather that they provoke questions and expand narratives.

“CULT OF DUMB”
Each one of these songs explores a different facet of our dumbing down of society and the loss of meaning we all live with, the loss of our very identity. The record is called Selections From DUMB because the concept is far too great for us to explore in a traditional record that could have just been called DUMB. So we pick and choose the elements of this idea we find interesting. Cult of dumb is about the sort of “cult” of consumption, capitalism, and the fear and anxiety it creates. Again, we use ’90s dance tropes to explore this, as the musical equivalent of luxury car wax or napkin holders, or the million other useless things we have around us. This song was intentionally made almost entirely out of samples to enhance the idea that “we don’t really own anything”.

“THE REVISIONIST”
This song, like others on the album, functions on two levels: the personal and political. On one level, it’s about revisionist history, as witnessed in, say, elementary schools—how Columbus is portrayed as this great dude when really he sucks. Or perhaps how colonialism is rewritten to have all these merits that outweigh atrocities. Or even how whole cultures are erased, like Native Americans. On the personal level, we revise our personal histories everyday to ourselves just to survive, and people who hold power in our personal lives like parents or loved ones in general rewrite the past. The main idea is that the one who holds the power holds the eraser and ink too. “BYSTANDER 2” (FEAT. HEEMS)
We wrote, recorded and mastered this within hours of our deadline to submit this record. It’s a reworking of the earlier track “Bystander Effect.” It’s about the same themes of cultural apathy, but really its an original track, not a remix. We use a lot of non-traditional remix methods in our writing process, things most electronic artists would consider cheating or incorrect but for us it gives a completely alien quality we could never otherwise achieve. I particularly like the second half of this track as it turns into something reminiscent of glitch/noise Sigur Rós. Definitely the strangest track on the record along with “Hellboy / Puppet”. Heems’ verse on this is great, and he was the right person to deliver it. He is an old friend and big fan of the original song. He’s got some great references and wordplay on there, like the Wu-Tang line that starts his verse. Shoutout young cocoa butter, the brown Chris Farley.

“THE WORLD GOES ON”
“If everyone’s complacent, then who of us will become the outliers?” our narrator wonders. The world goes on indifferent to your feelings or concerns. The world says F U. Or maybe that’s just what living in NYC does to you?

“DISAPPEARANCE OF THOUGHTS”
This song is about how consciousness is only a projection of our brain experiencing itself. Where does thought come from? Where does it go? Am I a bundle of veins and sinew, or am I a divine being of light? And as we rely more on devices and groupthink ideology to do our thinking, certain thoughts or ideas stop occurring to us. Thoughts disappear. Our skills degrade. Birds don’t use GPS, and they seem ok. Can I be a bird someday?

“BARELY THERE”
I think I’ll let this song speak for itself; some things shouldn’t be uncovered.

Don’t play dead,
God is red.
And all of us alone,
We fade away in our homes.
Barely there,
I can’t exceed.
And I don’t wanna be the worst I am and get sucked away.
And I don’t wanna live and be so small and waste all my days.
(NOISE)