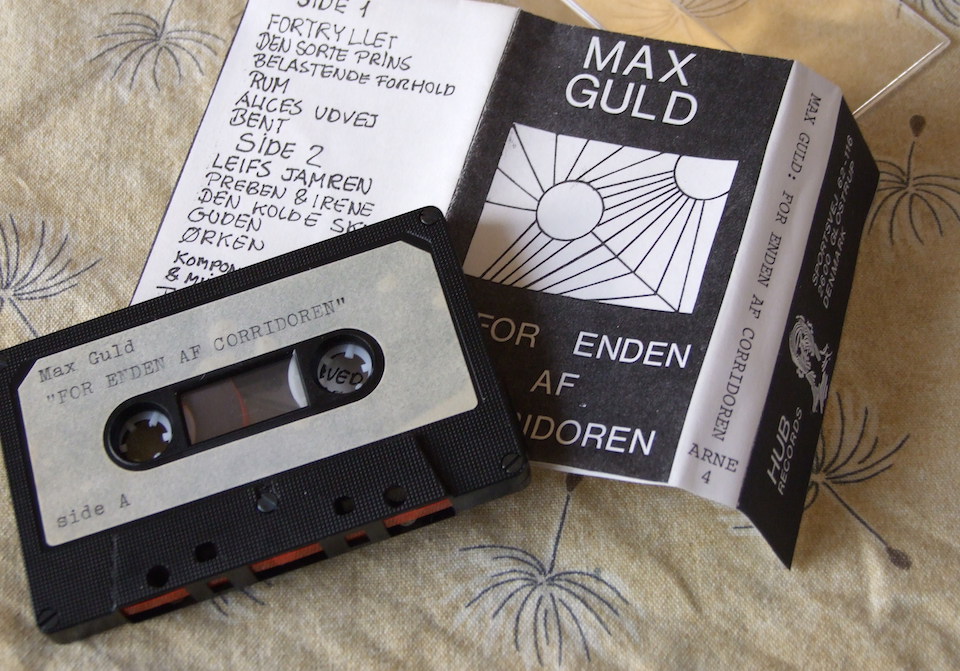 More than half of the songs on Max Guld’s ultra-rare For Enden Af Corridoren record are instrumentals, but that doesn’t make them any less haunting. If anything, they’re even more evocative, oozing the otherworldly feel—largely inspired by Kraftwerk and Brian Eno—the Den Forspildte Elite co-founder created in his tiny Copenhagen bedroom three decades ago.

Now available in a new vinyl edition via Dark Entries, the raw cassette release is streaming below in full, right alongside an exclusive trip down memory lane, courtesy of the man himself…

“FORTRYLLET”
I do not remember how this song came about. It was 30 years ago, the first song I composed for the album. I might have thought about it as an opening, going to make people ready for the album. It is in the key of C-minor and the rest of the album follows this. (It’s the only key I can play keyboard in.)

“DEN SORTE PRINS”
The next song I composed. I thought it should be the “hit” or “the catchy song” of the album to make people stay for the rest. It was like I had to follow a certain path—one song leading to the next. I composed almost all of these songs chronologically.

“BELASTENDE FORHOLD”
This song is very technical. The main part is the rhythm box on full speed, started and stopped at the right time. Not much playing yet some think it’s the best track on the album. The title means something like “Stressful Conditions.”

“RUM”
The next song in the path is darker. I thought we had to calm down a little bit. The song expresses longings and calmness.

“ALICE UDVEJ”
A song I later played with my band Den Forspildte Elite. The song is very simple with no rhythm box, only bass, a riff and vocals. About Alice and her chosen one, who didn’t want her after all. “BENT”
The closing song on side one, about the loneliness I felt at that moment. The solution would’ve been to reach out, which the person in the song never did.

“LEIF’S JAMREN”
“The Lament of Leif” came to me as an experiment with vocals and a mic. A catchy piece comes and goes in between. “The Lament” is the vocal part and makes the tune.

“PREBEN & IRENE”
One more song without the rhythm box. Preben and Irene were the names of two cats I’d heard about. In Danish these are funny and strange names for cats. In the song it is about a couple with a strange relationship. Him tied up in a cupboard, her glancing at him once in a while.

“DEN KOLDE SKULDER”
Inspired by the techniques Brian Eno used, like echo from a reel-to-reel tape recorder with three heads. Maybe even two recorders for longer echo. I don’t remember. The result of the echo is a bell-like sound that makes it feel like “the cold shoulder”!

“GUDEN”
About a fictional god that takes you into his realm. It was more guitar-based and a bit different than the other songs. It was like I could feel that the album was ending and I had to move on.

“ØRKEN”
Now I am going to another place. The song was recorded in our rehearsal room, not in my apartment. That makes it sound a bit different. And I used an EML synth not the Moog Prodigy for this song. I think it winds the album down in a good way. I have never made lyrics of tunes that sounded quite like these since.