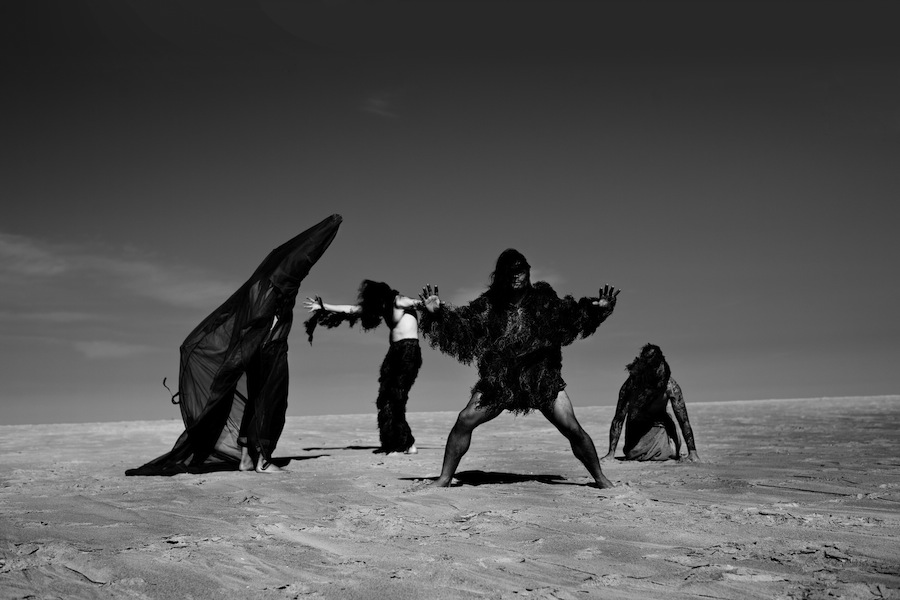 When Aaron Turner made us a mixtape last February, the former ISIS frontman made sure to mention a “secret record coming out in the spring” that’d be bigger than his recent one-off releases with Mamiffer, Locrian and Circle. The restless singer/guitarist wasn’t kidding. As you’re about to witness, the almighty Old Man Gloom return with their first record in eight years this week. Simply titled NO, it veers between two very different worlds: the kind of pummel and plow routine you’d expect from members of ISIS, Converge (Nate Newton), Cave-In (Caleb Scofield) and Zozobra (Santos Montano), rounded out by enough rough edges of experimental muck–monastic chants, ambient noise, feedback that’s foaming at the mouth–to make it a definitive OMG production. Shit’s epic, in other words, a fact that’s furthered by guest appearances from Kevin Baker (The Hope Conspiracy, All Pigs Must Die), Mike McKenzie (The Red Chord), and the Phil Spector of underground metal, Kurt Ballou (Converge).

In the following exclusive, we premier a complete stream of NO alongside commentary from the group’s two co-founders, Turner and Montano… Aaron Turner: Kneel all you who seek to be cleansed. Silence! This is a Holy Place and as such, the sanctity of it must be observed through your obedience. Prepare to be scoured in the white hot flames of Salvation.

Santos Montano: This is a track that no one will put up on YouTube, and jerks who like to post comments will write “tHiS AlBumZ CooooL but eye SkiPz the nOyze traCKz LoL”. It’s too bad that people can’t just put on a record and get into it. They need a toy with their burger, a digital download, and for Old Man Gloom to play the fuckin hits.

Aaron: Chapter 1: This is the trial, the way is dark, there is no turning back. First there is thunder, then there is the sound of scuttling insect hordes. You are overrun and fear takes hold. This is necessary. Do not falter; hesitation is failure.

Santos: This was one of the songs that initially shaped the identity of this record. It’s the gateway, and simultaneously the soul, of NO. I find it absolutely unsettling, awkward, and sonically challenging. Also, Kurt didn’t get it, so that’s always nice.

Aaron: Passivity is also failure. Action must be taken and taken quickly. To live–to really live–is to succeed no matter how this living might appear in the context of cultural and spiritual normality. Onwards or dark oblivion–these are the only options.

Santos: “Regain/Rejoin” had a very simple outline initially. On drums, I instantly wanted it to have a really mechanical feel–to be driving and not distracting, the musical equivalent of a straight line. As the layers started to build, and Nate got a hold of it, it took on a life that I think Aaron and I were not expecting, but it’s fucking awesome, and that core feeling is still very much intact. Definitely new Gloom. I don’t think Kurt really liked all the hand-claps we wanted to put in.

Aaron: You must revel in the destruction of your delicately constructed identity. Roll in the earth, rub the soil across your tongue, press cinders against your temples, and crawl into your primal mind. It is our existence as animals that is crucial at this developmental stage, not the rational mind.

Santos: This is some Nate Newton shit. That being said, it’s also some Old Man Gloom shit, because we were smart enough to tap his ass up in 1999, before Jane Doe turned him into a Filipino heavy-metal superstar. This was one of the points in writing where I said to myself, “huh…I guess we’re really writing an Old Man Gloom record right now.” A new Gloom standard. Kurt is on the fence with this one. Aaron: From these primordial depths we must again press forward, allowing once again the powers of intuition and intellect to guide us. At this stage, our journey is no longer solitary and we must seek those with whom our paths are conjoined, for it is our connection to them and them to us that will allow us to persevere.

Santos: Again, in 1999 while the rest of the world were concerning themselves with fake ass emo pop, we had the foresight to ask Caleb to be in our band. This is the kind of terrifying shit that comes out of his brain without much effort. As a drummer, I love playing to Caleb’s songs. They have so much character, and are simultaneously catchy, and ridiculously heavy. The song’s epic ending is maybe the apex of the record, which was very taxing for Kurt. I wonder if the ending is actually shredding peoples speakers.

Aaron: Now, you must quiet your mind. Remain still and allow all that which churns and undulates around you to come to full awareness. It is your ability to perceive your environment that will allow you to pass through trial unharmed. With this passage comes increased knowledge, and with this knowledge, growth.

Santos: In similar fashion to the last two songs, this is an epic Aaron Turner experience. All I can hope for is that dudes with beards get all stoney baloney, sit in a lazy boy, and let Aaron take you to his unsafe place. I’m not certain Kurt has listened to this song all the way through, so I don’t know how he feels about it.

Aaron: Superior knowledge should not be mistaken for ultimate superiority. Once again we must retain our animal minds and revel in our equal status amongst vermin and in the company of the divine. None are above death, none may be denied life.

Santos: We let ourselves get really Gloomy with this one. It’s like painting with a roller–all heavy and gloppy at first, but you keep pushing that paint around and it starts thinning out. But you don’t want to stop, so you keep pushing harder, trying to cover as much wall as possible with not enough paint, and eventually it just starts thinning out, looking spotty, and wrong, but you keep pushing, until there is no more, and you have to give up. Kurt was not a fan of the guitar solos at the end of this song.

Aaron: In our quest for fulfillment, in our strides towards wisdom, love must not be forgotten. It is central in our journey; it will carry us through. From love is born compassion, grace, care and wonder.

Santos: We insist on making Caleb record what we call a “dusty cowboy” song on every record. I’m not sure he likes doing it, but we’re all so into it, he has no choice. This one is my favorite, by far, of all the ones we’ve done in the past. Kurt played guitar on this song, and did a lot of studio magic to make it come together. He liked this one, interestingly.

Aaron: Do not be blinded by comfort. Do not allow complacency to lull you to eternal sleep. The journey is perpetual, the struggles numerous. This glorious storm of life will tatter our flesh and mark our hearts, but our willingness to remain awake will grant our souls a territory of limitless expanse and endless joy.

Santos: I think this song was the logical close to the record. It’s overwhelming initially and uncomfortable in the middle, with a triumphant climax, haunting and sweet and the end. I would encourage any listener to listen to the entire song as a whole, as it really is meant to be heard. The last two minutes are some of the finest on the album. Kurt would probably hate it, I imagine.

Previous VIDEO: SpaceGhostPurrp, “Osiris of the East”
Next LONG PLAYER OF THE DAY: Terry Riley, ‘In C’