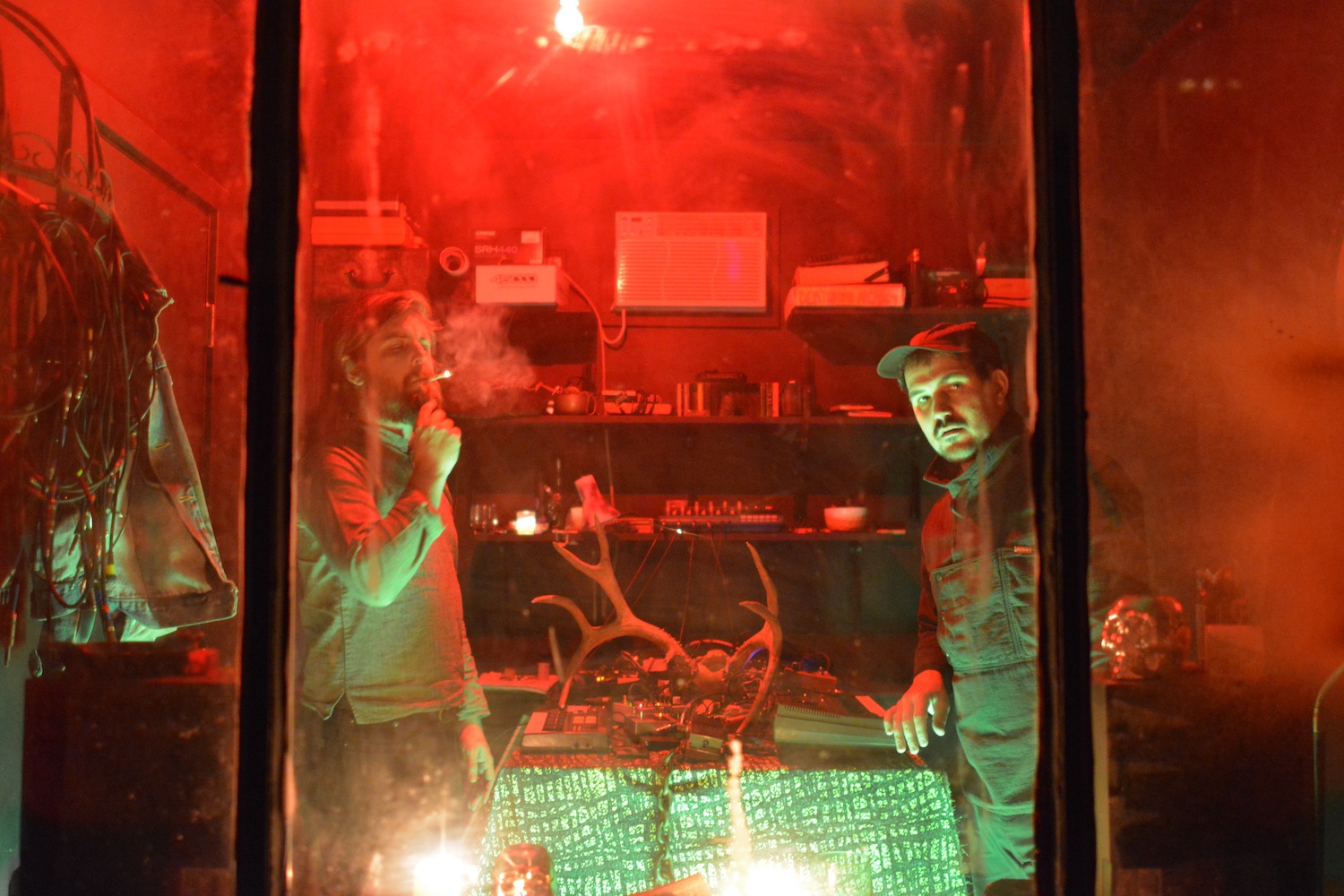 True to its title, New Age Sewage is a nightmarish listen from start to finish, dragging us all into the dust and darkness where Robedoor thrives. Since Britt and Alex Brown sound downright possessed these days—quite the accomplishment, since it doesn’t sound the least bit corny—we asked them to pull the curtain back a little, and share the stories behind each of their exorcisms. Here’s a complete track-by-track breakdown, along with a streaming version of the record before its April 21st release on Hands in the Dark….

“LOWER LIFE”
Britt Brown: We like to have a soundcheck jam as set opener—something loose, loud, and unstructured we can use to feel out the PA and test how our rig interacts with the room. This is that. We’ve only ever played it first.
Alex Brown: It’s when we light the Palo Santo wood, blow some smoke, metabolize whatever substances we’ve consumed, and prepare ourselves for what’s coming.
Britt: For the album version, our friend Ale—who mixed the record—helped scheme some flourishes, running stuff through rack units to make them stranger and more extreme. I love the rattlesnake slither he gave the main drumbeat.

“AGE OF SEWAGE”
Britt: This song is the core of the album for me. It was the first new track we wrote after Primal Sphere and it felt like the bridge connecting that era of the band with whatever the new one was going to be. We didn’t dissect it much. “Sewage” shaped itself.
Alex: We’ve played this song so many times, in so many spaces and states of mind, that we were pretty intent on making sure we captured an ultimate version for the LP. But we ended up needing way less edits and overdubs to get this where we wanted it because the song was already so ingrained in our bones. I particularly love the bulked-up the drums after the breakdown. There’s this turning point where it gets meaner and meaner, like realizing you’re about to have a bad trip but the realization comes too late.

“THE TUNNEL”
Britt: I made a demo of this track while sleeping on the ground up north of Garberville at a weed lab I briefly spent time in several summers ago. I brought most of my gear with me to kill time in the evenings because I got in the habit of staying up extremely late since my room had no windows. Maybe not surprising then that the song became about being condemned to follow a tunnel down into the bowels of a negative underworld.
Alex: We tried to make the tunnel literal in terms of sonic space, so it actually FELT like being dragged down some infernal hole. There’s these ancient lava tubes I used to explore near where I grew up in New Mexico, in the [El] Malpais [National Monument]—the “badlands”. You’d stoop and crawl through small passageways to finally emerge in these large caverns, where we’d turn off our flashlights and soak in total darkness. Your senses change immediately. You start to hear things that aren’t there. It feels both claustrophobic and endless, like being lost in a void.

“MAGE IMAGE”
Britt: I remember first making the beat for this song while sitting on the floor of me and Amanda’s old place in February 2013, because our friends Holy Balm from Australia were staying with us en route to SXSW, and they were in the other room. But we didn’t manage to flesh it into playable form for at least a year, possibly longer. It was definitely the last song on the album we finished.
Alex: I like that there isn’t a payoff, just this zapped stasis haze. I’m pretty sure we recorded the trance outro on a night when something seismic happened. We got a little more blasted and zoned than usual, and committed to playing as distant and hypnotized as we could. The way it dissolves within the mix feels like getting a sensory deprivation bag pulled over your head, or getting shoved underwater, everything suddenly smeared and submerged.

“CADAVER DOGS”
Britt: One night while watching a Snapped marathon I tripped out pondering how cops train dogs to recognize the scent of rotting corpses. It left an impression, so I wrote some lyrics. We’ve been playing some version of this song since mid-2013 but my favorite was during our European Primal Sphere tour when our friend Ryo would bash a contact-mic’d metal spring reverb unit in time with the drum frenzy at the end. It was frequently the most deranged-sounding six minutes of the night.
Alex: This one was SUCH a moving target; shit, I thought we started playing this in 2012. Like “Sewage,” we had the finished version of this song in our minds early on. It just took three years to get the right take. Whenever I hear it I’m reminded of the time our song “Pacific Drift” got licensed for an episode of this true crime show, Final Witness. They used it during this re-enactment scene where the cops and their dogs are being led into the forest to find a body. This jam really stirs a visceral reaction in me when we play it—flying over the ground in pursuit of the scent of decay. “D.F.A. (DON’T FEEL AGAIN)”
Britt: I think this song was originally named for purely mnemonic reasons, to help us remember the main notes. It definitely belongs to the Robedoor lineage of plodding, miserable dirges. The initial version was bleaker and even less musical, but during our second failed attempt at recording the album in June of 2014, our friend Brian Miller—who was trying to help us engineer the sessions—suggested a more churning, dynamic outro, and it stuck.
Alex: Perhaps our greatest bummer. I remember listening to tape after tape of versions of this jam and joking that it sounded like a funeral procession for Good and/or a victory march for Evil. Strange fact about the Brian Miller sessions was they took place during daytime—one of the very few exceptions to our “nocturnal only” rule. Of course, we ended up scrapping those recordings. But it’s testament to how legit a Robedoor believer/wraith he is that he was even able to coax this infernal downer out of us on a sunshine summer afternoon.
Britt: The album version ends with a sample of some hippies chanting around a bonfire in Sedona that I slowed down and distorted, so the pops of sap from the burning wood sound metallic and industrial. Suits the mood you should be in if you actually make it to the end of the fucking record.
Alex: One final memory of this song was ending our set in Paris at Garage MU in 2013 with a particularly hateful and harsh “D.F.A.” At some point deep in the throes of crushing doom I happened to turn around and realized there was a ring of fashionable Parisian women right behind me, headbanging even harder than we were. Then I fucked up my riff.