Stream the Spinto Band’s New Album and Read Their Commentary 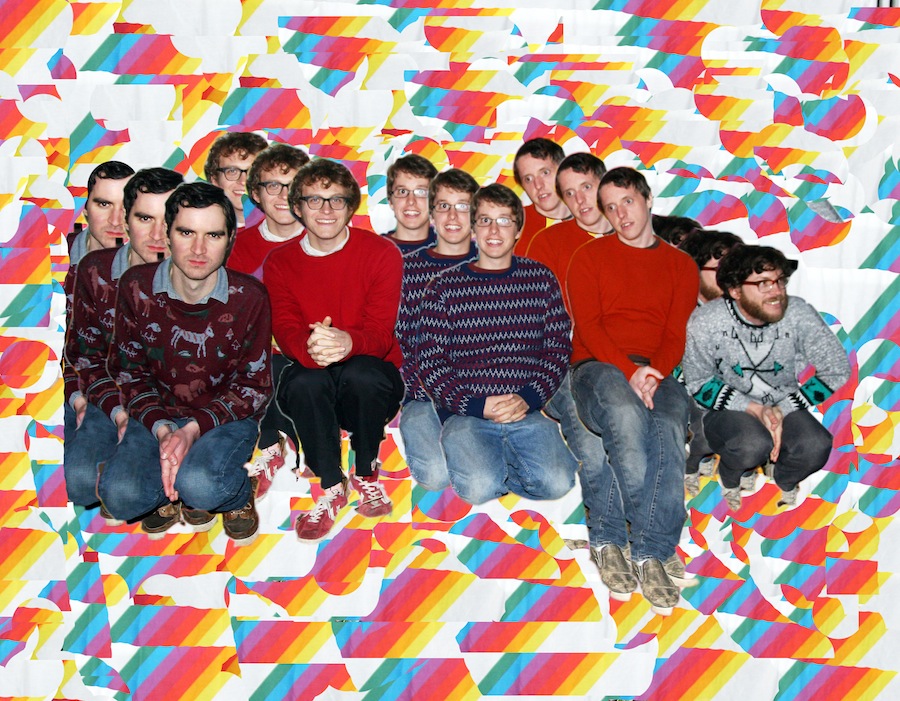 “The Spinto Band is still around?” someone in our office said the other day, referring to Wilmington, Delaware’s most reliable indie pop band.

A fair question given that four years have passed since the group’s last proper LP (Moonwink) and they’ve basically spent the past 12 months sculpting the self-produced hooks of Shy Pursuit. All while hiding at their Garden Center headquarters, which was chronicled in a series of videos here. This is about an imagined town called Cookie Falls, which resembles the pastoral beauty of its inspiration: those stages in Super Mario World. However, its inhabitants are full of bored teens who take muscle relaxers recreationally and occasionally get themselves into trouble. To counter this lyrical malaise we combined the sound of omnichords and strummed piano strings. –Thomas Hughes

This song was written a long time ago in a house I was renting in the summer of 2008. There was a rabbit living in the backyard, and I’d always see him in the morning. As the summer went on I started leaving him little scraps of food from the muesli I’d eat for breakfast, and by the end of the summer, we had a little tradition of hanging out every morning together and eating breakfast. In honor of the meal we ate together I named him Muesli, and in honor of the great rabbit that he was, I wrote this song. –Nick Krill

This composition grew out of trying to utilize the hypnotic chord progression found in so many of my favorite Harry Nilsson songs. It eventually evolved into an attempt to capture Michael Jackson and the Rentals and lock them into that Nilsson cage, which I’m sure is an exciting musical fetish for other people out there…Right? –TH

This song is fun because I get to belt out a big ol’ vocal in the chorus….kinda try to be Harry Nilsson singing “Without You” for a split second. Harry, if you can read this in the great hereafter, give me some strength to hold that note out, okay? –NK

This is the first song that I have ever written that has lyrics. It was an interesting process to write/record.  When we first started this song it had a different vocal melody and no lyrics. It was a real basic one string guitar part that I wrote using a Nintendo DS synth(DS-10). We just started with that and some drums and then wrote the rest while recording the song. It was nice to make things up as we went along and I think it led to parts that I wouldn’t have thought up alone. The lyrics are drawn loosely from random things in my life but about nothing and no one in particular. –Joe Hobson

“Ada Lee” was an interesting recording experience because the final version here is sort of a composite of two different attempts at the song. In the original recording, the full song was kind of a high octane pop/rock number. Sort of like the last chorus of the song, when the full drum kit really kicks in. This was fine, but ended up being kind of boring…and not too dynamic. We ended up getting rid of all of the instruments in the beginning of the song and recorded brand new parts, keeping in mind the need for a changing dynamic and changing mood. So the song ended up being this kind of ramp that starts with a murky Bowser castle beginning and then ends with a upbeat outro. One of our friends visited the studio while we were working on it and said “wow, it kind of starts off really 8-bit Mario…and then by the end you guys get all Sonic the Hedgehog on me.” I think that was probably the best analysis of a Spinto Band song I had ever heard, and it was an honor to have Mario and Sonic used to describe our work. –NK

The story of a kidnapping gone horribly wrong. Twelve-stringed guitars and orchestra bells collide violently because they rarely get such a chance. There’s also an interesting compositional divide between sections of the song: The chorus has 12 chords but only five notes. The verse has 12 notes but only five chords. (All figures are approximate.) –TH

More tales of confused youths, but with a little bit of sheen from The Ice Storm. This is one of the more keyboard-led songs on the record and as a result, I think every piano in our recording studio (a total of three!) is represented here. My melodies often determine the amount of syllables I’m able to use so I was happy to end up with a near-perfect rhyme scheme which doesn’t interrupt the story. –TH

This is the narrative of a Halloween party where something bad happens to someone you (kind of) like. Jeff and Joe’s dad, Stevie, played the pedal steel guitar solo and that section is one of my favorite moments of music we’ve ever recorded. –TH

The biggest memories I have when I hear this song are of the different places I was in while writing it. The first memory is of walking down the street in Lawrence, Kansas after leaving Mass Street Music and heading back to the concert venue. During that walk, I came up with most of the song. The second memory is of finishing up the song while standing around The Slowdown in Omaha. In The Slowdown, they have a neat wall partition that they can fold out. I remember walking around that partition and finishing up the song. –NK