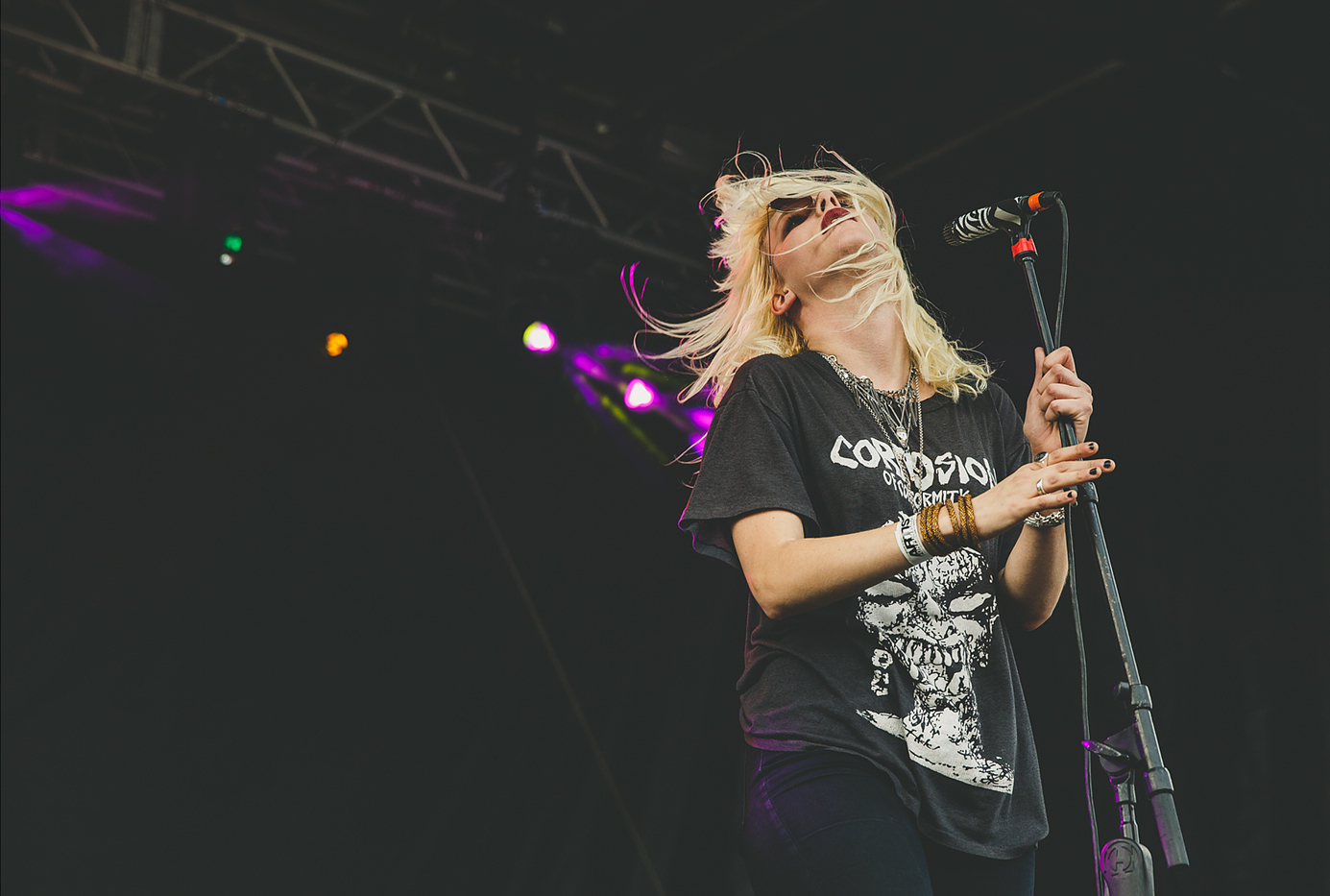 The So-Called “Whore” In the C.O.C. Shirt

It all started with the C.O.C. shirt I stole from my drummer, who stole it from our friend Steve.

During our tour, I posted a Facebook photo of myself from the Fun Fun Fun Fest. (Because that’s the world we live in now.) In the photo, I happen to be wearing the C.O.C. shirt. I’ll tell you another thing about the world we live in now: People can troll you. A punk guy that I had known for years nicknamed Barnicle commented, “Oh, I didn’t know Urban Outfitters was selling C.O.C. shirts now,” followed by, “Sure, buddy, like Lady Gaga listens to Doom or Gism.” Winking face. Smiling face. (Emojis give cyber face because you wouldn’t say that to my real face, would you? Soften the sentiment so I don’t actually spit in your face next time I see you IRL.) Then, later on, a random comment from a random named Chris Thomson. This man wasn’t even on my “friends” list. Thomson challenged me: “Name your favorite C.O.C. song, album or band member?”

From a hotel bathroom somewhere in California, I sat on the toilet, phone in hand, glaring at the responses. My ability to just let it slide was wearing thin. As someone who writes publicly and explicitly about things most people wouldn’t share with their own therapist, I have accepted the criticism that comes with putting one’s self into the public. However, these comments were on my personal profile picture on my private Facebook page. I thought the “friends” I had on there wouldn’t treat me like the slew of spineless anonymous commenters on random websites were “entitled” to do? Besides, this was about more than a shirt.

“This is sexist bullshit,” I thought. “Not one person would be questioning me if I were a man wearing this stupid shirt.” Maybe I was being too sensitive? No, I wasn’t. I contemplated keeping my mouth shut, not wanting to bother with such a ridiculous argument, but I decided to call out Thomson. Because, fuck that. Plus, he was the last one to say anything.

With my pants around my ankles and the bathroom sink preemptively running, I typed out a response in a private message:

“To answer your question on my photograph (which I can’t help but see as some of kind of macho asshole challenge. If that were a photo of some guy fronting a band wearing a COC shirt I highly doubt you would even question how many times he’s listened to “L.S” while rolling cigarettes in his bedroom but whatever), My favorite album is Eye For An Eye. It’s just straight up, however Deliverance is obviously important and I even like songs from In The Arms of God like “It’s That Way” cuz its just good even tho it’s kind of cheeze. My ex from years liked that album so it’s kind of stuck in me. But the earlier more hardcore stuff is what I like best. Again, I think it’s fucking disgusting that (even if these comments are jokes) a bunch of guys call me lady gaga and make urban outfitters jokes and challenge me on COC cuz of that photo. Would you do that if I was a guy? Hell no. You would not for a second. It’s insulting and rude. It’s just totally backwards. And just because I read fashion magazines and write for Bust doesn’t mean I can’t listen to COC.”

I didn’t feel better. I didn’t feel worse. Chris Thomson. The name sounded familiar? But I was too done to figure him out. I pulled my pants up and went back to bed.

“Brooklyn Vegan commenters are notoriously awful,” Hether explained to me in a taxi from the Newark airport to Greenpoint. “It’s insane. So insane.”

I had never read comments on Brooklyn Vegan’s website. I didn’t like reading comments about myself from anonymous people. I was of the school that “ignorance is bliss” when it came to trolls on message boards.

Hether had been asked to give her “Top 10 Records of 2013” for Brooklyn Vegan. Instead, she penned a satirical list about her Top 5 Things About BV Commenters on their website. She thought it was a funny social experiment. Curious, I looked up Hether’s list and scrolled down the article to the infamous sea of insults. The words “slut,” “whore,” “deviant,” “ugly” and “bitch” were littered like candy wrappers throughout the text, along with my own name. Why was I being talked about on here? There was one commenter who discussed what a confused whore I was, citing articles I had written and wrongly accusing me of having an affair with a fellow musician.

While I laughed at the screen, part of me was undeniably angry. I don’t feel sorry for my gender—ever—but at a certain point, it’s, like, get creative, people. Can’t you think of something else to insult me with besides calling me a whore yet again? Being called a “whore” does not bother me. What bothers me is that the word “whore” is still used an insult. In 2013, what the hell is so inherently wrong with being a “whore” anyway? If that person is comfortable being in the sex trade and feels content with his or her job, then why would being a “whore” be a bad thing? Besides, the so-called “whores” were phlegmatically making money, while the rest of us sometimes found ourselves having mediocre, one-sided sex for free.

Furthermore, these anonymous commenters were just that: anonymous. The disconnect of the screen gives people this false backbone. Louis C.K. talked about it on Conan using the example of a kid who bullies another kid face to face and sees that kid cry: The bully’s empathy light goes off and he realizes the consequences of his actions. Kid on the internet calls another kid a “faggot” on Facebook and clicks away to YouTube without having to face the mildest repercussion. False backbone.

Feminist pioneer and performer Kathleen Hanna recently talked about how it took her a long time to not want to engage with online arguments. “People in the ’90s had to take out a piece of paper and write you a letter,” she told Pitchfork. “It’s taken me a long time to not take that stuff seriously… As a political musician you felt obligated to have a dialogue. Now I realize.”

Hanna’s whole career and political impact revolved around igniting dialogue. I respect that. Whether she was pissing people off for standing half-naked with her band Bikini Kill in a community center in Portland screaming about incest or questioning health care through song lyrics, she was doing something that created controversy and got people talking about social issues. I think this is powerful. It’s when the talking just becomes “whore, whore, whore” that it’s not even a dialogue worth acknowledging. That’s not a discussion. That’s just a coward who can’t fathom the threat he or she feels and retorts by lashing out in the most unoriginal way possible.

After reading that quote, I tweeted at Hanna and thanked her. She tweeted me back. That was the kind of dialogue that meant something to me.

About a week later, I get a text from Steve (the original owner of the C.O.C. shirt) and an old friend of Thomson’s.

“Ha! You called out Chris Thomson!”

Right, Chris Thomson. I forgot that I had left a comment back to him on my photo when he had not responded to my private message. The Internet does funny things to protect us, like keep messages from people who aren’t approved as your “friends” on Facebook in a private folder, yet allows any random “friend of a friend” the ability to cruise your entire catalogue of tagged photographs.

“Well, he was being a fucker!” I responded to Steve. In the time it took Thomson to respond to my message, I had found out the now 40-plus father was once a prominent figure in the DC hardcore scene in the ’80s. He was in the Monorchid, Circus Lupus,  Ignition and Fury.

I trolled him. Mr. Discord. Mr. Touch n’ Go. Hardcore superstar. I got it. I didn’t feel threatened. I felt intrigued. It all made sense.

Simultaneously, Steve had contributed to the C.O.C. thread: “Battle of the great punk singers! Ha Love you both!! Good to see challenging dialogue and the calling out of bullshit still exits! You two should do a duet!”

Later that day, I opened my inbox to a message from Thomson, along with a friend request:

“Apologies again, this ended up in my “other” mailbox. Like I said I’m a grumpy old punk rock dude and have been calling out men and women on their shit since forever. So if you’re a guy wearing an urban waste shirt I would have asked the same questions.  Eye for an eye is my fave too, got to share some bills with mike dean’s side projects. Anyway thanks for schooling me.”

Sometimes keeping your mouth shut does nothing. I have been getting in trouble for my big mouth since the fifth grade when my teacher, Mrs. McDonald, fed up with my total inability to be quiet, fashioned a chalk outline on the corner of the blackboard to mark every time I spoke out of turn with a strike equalling one minute of detention. I had to stay after school for at least 15 minutes on most days. Since then, I have learned when to shut up and listen. I have learned when to keep it to myself. Pick your battles.

A few days later, I received another message from Thomson.

“[Y]ou ever feel stupid? that’s me after our volley. got a bunch of tiny shirts from my old bands, my ex was petite, hardly worn, perhaps why the ex is an ex, you want?”

Steve was kind of right. Dialogue could be really great.