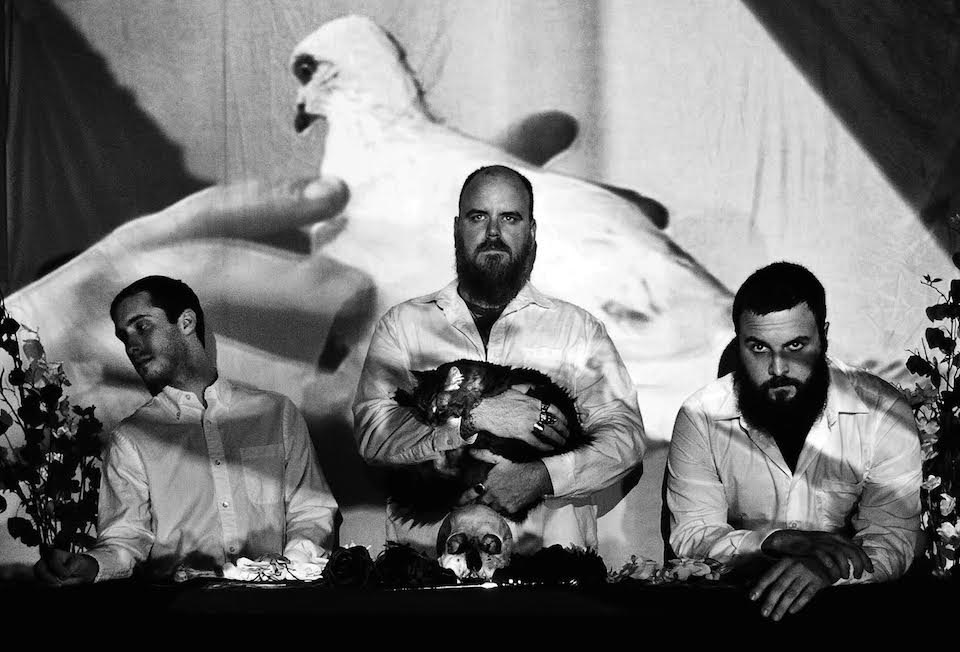 COLISEUM (LEVEL PLANE, 2004)
It’s funny to think that the 26-year-old me felt the need to get back to basics at that young age, because my experience as a musician was relatively limited, at least compared to what the future held for Coliseum. Nevertheless, I’m glad I decided to start a stripped-down heavy punk band and record our first album in my garage. I like the raw energy of this record—the spontaneity and loose edges of it all. Some of the influences are obvious but I don’t think we sounded explicitly like one specific band other than ourselves. There’s a bit of sameness across the album as a whole that gets a little mundane and we hadn’t explored dynamics much yet. But the Coliseum mission statement of big choruses and generally traditional song structures is there and would mostly remain intact throughout these years. We were off to a good start.

GODDAMAGE EP (MANIC RIDE, 2005)
Even at the time it seemed that this would become one of the band’s more enduring musical statements. Pegboy was on my mind a lot while writing some of these songs; I wanted to bring that kind of powerful, chunky melody to the band. The opening riff to “Set It Straight” was inspired by Screaming For Vengeance-era Judas Priest. We sped everything up, made the hooks bigger, book-ended the EP with two anthems we still play to this day: “Year Of The Pig” and “Set It Straight.” Listening to it again, I’m surprised by how melodic the records is, I think people forget that about our early material. I’m still proud of this record and happy that people feel attached to it after all these years.

NO SALVATION (RELAPSE, 2007)
I have the most difficult relationship with No Salvation of any of our releases. I can hear the push and pull of my melodic tendencies and songwriting instincts clashing with a pressure I put on myself to overcomplicate the songs. Chris Maggio is a powerhouse drummer but our musical interests and styles often clashed. At times it worked out to great results (it’s hard to argue with “No Benefit”), then at other points the songs seem to get lost inside themselves. No Salvation received our poorest critical reviews and didn’t sell too well by Relapse standards (not that any of our records have sold particularly well). We toured like crazy from its release in Summer 2007 to Spring 2009, playing a lot of package tours to large audiences while receiving a lot blank stares.

It wasn’t until 2010 and later that we started hearing a faction of fans saying No Salvation was their favorite Coliseum record. This surprised us as previously it had seemed that the general consensus was a preference for our earlier work. Such is the occasional stubbornness and delayed reaction to a band’s output. There are a lot of things I appreciate about No Salvation. Kurt’s production sounds great, of course. We still play “Defeater” a lot, and there’s apparently a band named after the song. “Interceptor,” “Seven Cities,” “Fall Of The Pigs”—a lot of the rippers turned out great. When the hooks of the melodic songs come together they work well, like “The Fate Of Men” and “Funeral Line.” It’s not my personal favorite of our records but I greatly appreciate that people connect with and enjoy No Salvation.

HOUSE WITH A CURSE (TEMPORARY RESIDENCE LTD., 2010)
Certainly our most controversial album, at least upon it’s release. There was so much that went into House With a Curse, in so many different ways. Obviously it was the first record with Carter [Wilson] on drums, who is the current, permanent, and longest-running Coliseum drummer. With this record, I took the reigns on songwriting and chose to write most of it on my own, rather than in the practice space with the band, and try to start the songs with rhythms rather than riffs. Revisiting it, it’s still a pretty riff-y record, much more so than I remember, but the guitar is starting to have the chance to loosen up a lot more. Then Carter finally gave Coliseum a groove. While there’s a lot of fun stuff on here, it’s also a dark, dense record. Very Southern Gothic. It’s a lot to digest and it was a lot for us to bite off at the time. I still think “Blind In One Eye” is one of the best songs we’ve ever done. I love “Crime and the City,” “Perimeter Man,” “Lost In Groningen.” “Cloaked In Red” is one of my favorites and was our first big nod to Killing Joke, which no one seemed to catch at the time. I wish I’d sang “Isela Vega” better, but Jason Noble’s vocals make it wonderful. I’m so thankful he was able to be on a few songs on the record. I think House With a Curse is an interesting and cool record in our body of work and one that’s ripe for reexamination.

PARASITES EP (TEMPORARY RESIDENCE LTD., 2011)
This EP was nice for a bit of fresh air, especially after House With a Curse. The Parasites title was inspired my Mike’s germ phobia and then interpreted by Rick Froberg for that great cover art. Half of these songs were extras from the House With a Curse sessions and half were recorded by J. Robbins at legendary DC studio Inner Ear, which was like a religious pilgrimage for me. “One Last Night” has quite often been a set-opener over the past few years; it’s the only D-beat song we’ve written in almost 10 years. Kind of a “light D-beat” nod to the early days. A lot of fun songs on this EP, a spiritual cousin to Goddamage in vibe and as our only other eight song EP. Another record of ours I think is well worth reinvestigating if anyone missed it.

SISTER FAITH (TEMPORARY RESIDENCE LTD., 2013)
With Carter having been in the band for many years at this point and Kayhan [Vaziri] joining on bass just as we started to write for this album, it was the most solid the band had ever been and the music we were writing felt the most assured and enjoyable of anything we’d done to that point. The wonderful musical experiences were so greatly needed to cope with the difficult times of loss that were going on with family and friends in 2012, when we were writing and recording Sister Faith. Hence, nine of the 13 songs address that in some manner. Recording the album with J. at his new Magpie Cage studio was an incredibly wonderful experience, very magical. Luckily, the record connected with people in all the ways we hoped and it seemed to become the most loved record we’d done up to that time.

ANXIETY’S KISS (DEATHWISH INC., 2015)
I felt like we’d really touched on something with Sister Faith and were working together so well that I didn’t want to let time get away from us and let that energy dissipate. So while we were still touring in 2014 we started writing for our fifth album, which became Anxiety’s Kiss. For me personally, the fallout from the painful times in recent years turned into fears and anxieties that have made aspects of daily life and travel much more difficult. So, like always, I funneled that into the music and lyrics. Maybe that was part of my desire to jump right back into working on another album. In any case, my instincts were correct and this is certainly our best work. Carter and Kayhan brought more to the table than ever before, each contributing more in terms of collaborating and writing songs on their own, playing multiple instruments, and singing backing vocals. I expanded much further vocally, trying new things melodically and lyrically, playing more synth, and tried to expand more on my ideas of sustained guitar notes and melodic texture. J.’s production is the best I’ve ever heard from him, Anxiety’s Kiss is truly the best sounding Coliseum album.

All I hope with our music is that people connect with it and that it means something to them. You create something and you make a record that you want to hear. You make something that is meaningful, important and essential for you. Then you release it into the the world and it takes on its own life. We have no control over it once it leaves our grasp. I want our music to comfort people, to entertain them, to share life and memories with them. At its best, I want a Coliseum record to be a part of someone’s life, hopefully in a way my favorite records have been such a huge part of my life. And despite what I might see as our relative successes or failures, missteps or triumphs, I know that each of these records have been that on some small scale because people have reached out and told me so. That is forever meaningful to me and I look forward to the time when Anxiety’s Kiss becomes that for someone in the future.