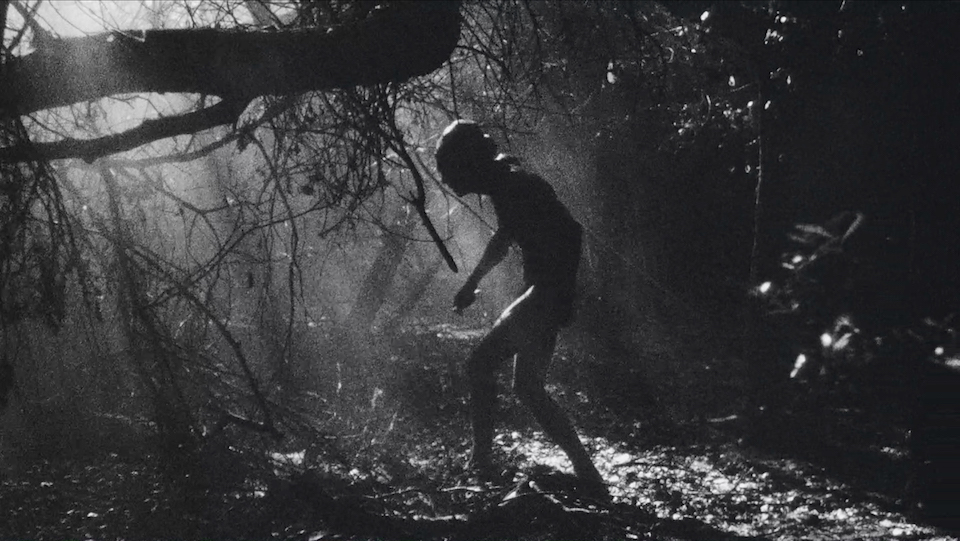 Flying Lotus has unveiled the official trailer for FUCKKKYOUUU, a short Eddie Alcazar feature that was shot on 16mm black and white film and scored by the producer. The official synopsis of the “experimental short/music video” goes a little something like this:

With the ability to travel in time, a lonely girl finds love and comfort by connecting with her past self. Eventually faced with rejection she struggles with her identity and gender, and as time folds onto itself only one of them can remain.

No word on when it’ll get a widespread release, although a few audiences at Fantastic Fest got a chance to see in Austin over the past week. In semi-related news, FlyLo spoke to Pitchfork about WOKE, another film collab that’s evolved into more of a loose musical collective with Jeremiah Jae, Thundercat, George Clinton, and Shabazz Palaces frontman Ishmael Butler.

“The WOKE project started about three years ago,” FlyLo explained. “I, myself, and some screenwriter friends of mine started writing a script for feature film called WOKE. It was something that we developed for quite a while. Initially, it was going to star Ishmael from Shabazz Palaces and Jeremiah Jae. We worked on it for a while, started workshopping, but there’s always the financial issue—I haven’t found anyone who is going to invest in the film.”

With the movie portion of the project on hold, the group shifted their focus towards music with little concern as to any concrete ideas or deadlines. “There’s nothing set in stone,” he explained. “We have a bunch of ideas. There’s about like nine songs kind of floating around…. We’ve done a lot of recording over this year. I want to make sure that all the stuff that we do is in the same room together. I’m not trying to do e-mail shit; I really want it to be organic and a true collaboration.”

WOKE’s first official single was released earlier this week through Adult Swim. Here’s what it sounds like:

And FlyLo’s thoughts on the track:

That song is one of the first songs that we came up with, Ishmael and myself. He flew into L.A. and stayed at my house for a few days; we knocked out a bunch of ideas, and this was the one that I just kinda started building out. He came here and I would just make tracks, and he would be writing, and then we would have something recorded. We have a bunch of ideas, not all of them finished, but a lot of good starting points. This was the first one that we just had to follow through on, and Ish works really fast. He gets all of his ideas out really fast and he was pretty much waiting on me to do my verse for a very long time, because it takes me forever to get into the headspace and vocals. For him, it’s like nothing.

As for whether the WOKE film will ever get made, FlyLo said he hopes to make it happen eventually along with a potential LP and tour. For now, here are some stills from FUCKKKYOUUU and its official trailer…