Levon Vincent On…
The Songs That Shaped Him,
From Terry Riley to Public Enemy 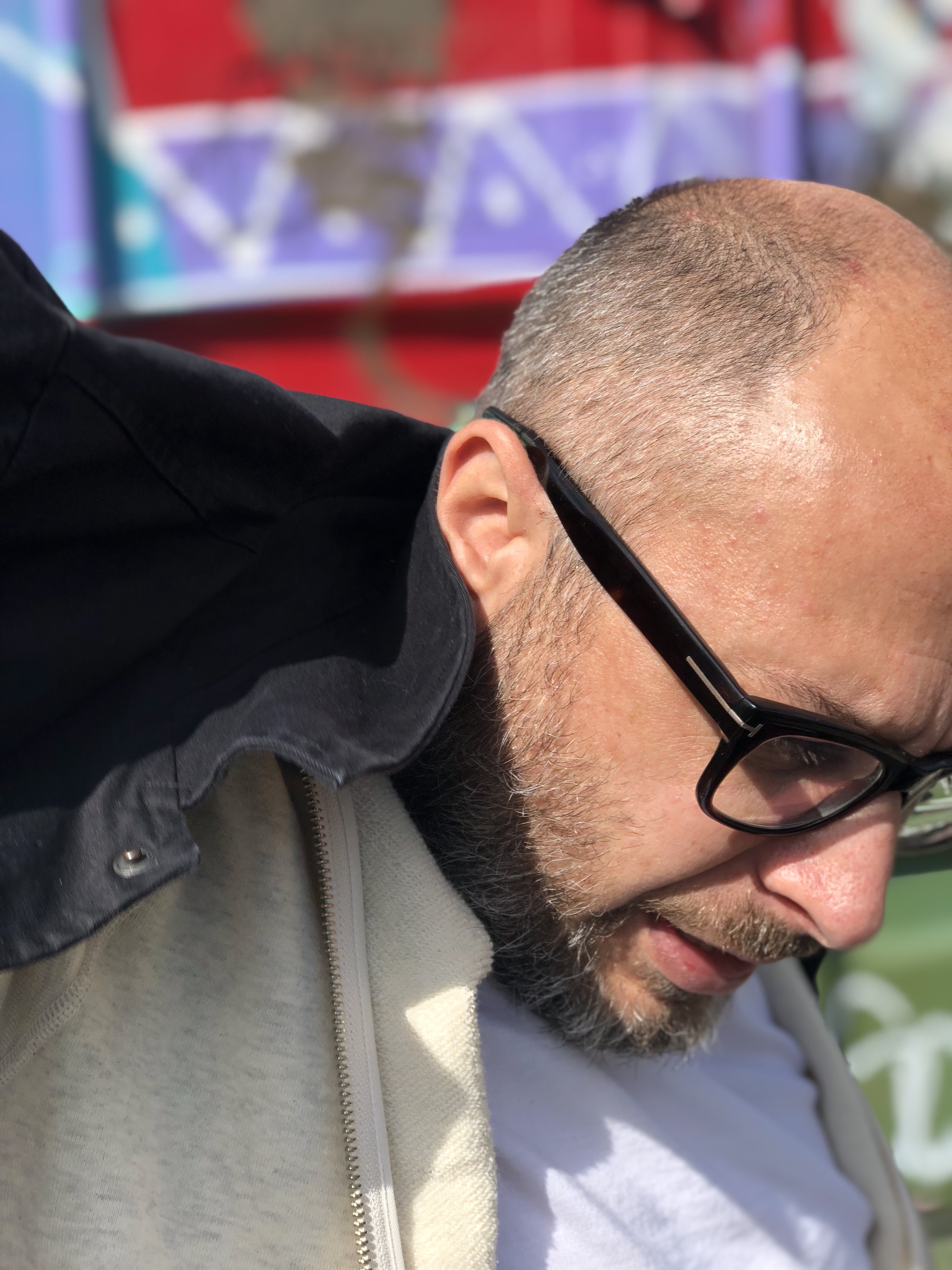 Soundtrack of Our Lives is a recurring feature where we ask our favorite artists to reflect on their past via their personal record collection. On deck this week: underground dance music don Levon Vincent, who melded his love of minimalist composers and house producers on last year’s World Order Music LP.

“World Order Music is the sound of having fun,” he explained upon its release, “enjoying life, expressing myself through music, exploring new rhythmic ideas, unloading emotional turmoil, living with optimism, all the good stuff!”

THE RECORD THAT MADE ME
WANT TO PURSUE MUSIC

THE RECORD THAT
BRINGS ME BACK
TO THE GOOD OLD DAYS
Frankie Knuckles
“The Whistle Song”
(Virgin, 1991)

I first heard this song at the Sound Factory. Frankie Knuckles held a residency there in the ’90s. That was early on in my clubbing days and one of the most optimistic times of my life. There are a lot of genres and sub-sects of house music, but what really speaks to me is this classic style that merges the elegance of bebop with the streets. The sound of the Nu Groove era, and songs by Bluejean, etc….

THE RECORD THAT
MADE ME FALL IN LOVE
WITH ELECTRONIC MUSIC
Art of Noise
“Moments in Love”
(Island, 1983)

I first heard this song on the radio, and it really opened my eyes to the idea that you could make instrumental music — that music did not have to have vocals. Soon after, I bought Rainforest by Paul Hardcastle. Both of these records inspired me greatly. Not just the great songs, but the concept of popular music which was instrumental and longer than just a few minutes.

I have been feeling the vintage UK rave sound lately. At the time, a lot of this stuff was considered very “druggy” and therefore was looked down upon by more sober U.S. artists. But delving deeper now in retrospect, I find that a lot of the euphoric sounds that made up this era are effective for any dancefloor, whether people are off their heads or not.

THE RECORD THAT SHOWED
ME THE ART OF SAMPLING
Public Enemy
“Rebel Without a Pause”
(Def Jam, 1987)

I grew up skateboarding. We used to go to the Brooklyn Banks and skate the Jersey City Path station. At that time, the big company was called SHUT skates, and Public Enemy’s It Takes a Nation of Millions to Hold Us Back album was considered the ultimate aggressive skate sound.

As an 11-to-13-year-old kid, I thought Flava Flav was entertaining, but through all that tomfoolery, Chuck D managed to sneak in facts to me about COINTELPRO and the tools the state uses to subvert “anti-social” behavior — the malevolent hand that manipulates us all. It was great to know the truth early on, because I always felt something was dishonest with our world in my gut, and this helped me to understand the who and the what.

A great dance tool. It has the right “thump” and sounds good everywhere. That’s particularly difficult with all the congas; there are a lot of percussion records in house music, but the transients are usually a little painful to play loud without hurting people’s ears. This one is mixed perfectly and always sounds right.

THE RECORDS THAT HELPED
ME APPRECIATE HOUSE
Jungle Brothers, I’ll House You
Royal House, Can You Party?
(Idlers, 1988)

As one is a derivative of the other…. I first heard Red Alert play this on the radio. I must have been 13 or so — whenever “Batdance” was big. It got a lot of airplay, as did “French Kiss” by Lil Louis.

I wasn’t able to go clubbing yet, but these records whet my palate and got me interested in the idea of DJing as a career. It would only be a couple years later that I started going out to parties. Lucky for me, you only had to be 15 in those days to get into NYC clubs.

THE RECORD THAT
MAKES ME WANT TO
RUSH THE DANCEFLOOR
Dinosaur L
“Go Bang!”
(Sleeping Bag, 1982)

This is an Arthur Russell production. I always heard this record in the ’80s, and thought it was cool. It has an interesting legacy for me because it was a song that I knew and liked, but I did not find out who it was until 8-to-10 years later.

I had some records from Sleeping Bag in the ’80s. I was into freestyle music, Arthur Baker, Information Society, etc., but I had no idea how big Arthur Russell’s contribution to music was until around Y2K, when they started releasing his personal archives. If you haven’t the documentary about his life and contribution to music (Wild Combination), I recommend it.

This is a good one for musicians to check out because anyone can create it on their computer or with their friends in an enjoyable afternoon. It is a great learning exercise and the outcome always sounds hypnotic in the nicest way.

Basically, a bunch of people — it doesn’t matter how many — get together and jam in C using a series of motives presented by the composer. It sounds different every time, but it always sounds nice. I have performed this with friends and also programmed it on a computer a couple times… good times!

THE RECORD THAT
CALMS ME DOWN
WHEN LIFE GETS ROUGH
Aretha Franklin
“Bridge Over Troubled Water”
(Atlantic, 1971)

There’s something I like about [longer] songs. Pop culture tells us that our attention span is about three minutes, but actually I find that most people really enjoy 10-minute journeys. Many of my own records are around that mark, and I often play them in their entirety when I DJ.

THE RECORD EVERYONE
WOULD BE SURPRISED
I OWN (AND LOVE)
Firehose
fROMOHIO
(SST, 1989)

I’m not known to be much of a rocker. I love most kinds of music, though; there is great stuff in every category.

This is one of my desert island records. I also can’t help but lament the demise of vinyl culture. This is one of those releases that really does sound so nice on vinyl. I saw them perform once and they had an old dog on stage with them. He laid there and enjoyed the music alongside the audience. Never seen that before or since.

THE RECORD THAT
WAS WAY AHEAD
OF ITS TIME
Dead Can Dance
Spiritchaser
(4AD, 1996)

I suppose they came from a “goth” sort of background, although I imagine they always took themselves to be more aligned with academia and ethno-musicology. Anyway, this is the best record to listen to when coming down from a night of Ecstasy.

THE CREEPIEST
RECORD I OWN
Sexual Harassment
I Need a Freak
(Heat, 1983)

I don’t know if people are permitted to say this record; this guy’s actual artist name is Sexual Harassment. Nonetheless, it’s total ass-shaking music in its purest form.

THE RECORD THAT
WAS A REVELATION
My Bloody Valentine
Loveless
(Creation / Sire, 1991)

This record was a vision of pop music that really seemed to soundtrack the future. The current state of pop music is a bit of a travesty, but there was a time where pop music was smart and topical as well — Kate Bush, Sinead O’Connor, etc. It was a brief moment in time where it looked like pop music would evolve into “music of the future”.

Loveless certainly delivered that vision quite well. It was colorful, captivating, all of that. The timbres and colors still sound so warm, so futuristic.

One of my favs! I heard this on a mixtape given to me by a well-known graffiti artist from the ’80s. At the time, I was working at a record store on Lafayette Street. The tape also included Pulsallama and the Bush Tetras. “The Mexican” always appears in Top 10s of the best breakdancing tunes of all time… I agree!

THE RECORD I
MOST ASSOCIATE WITH
MY BERLIN MOVE
Levon Vincent
“Man or Mistress”
(Novel Sound, 2011)

I wrote this record as I moved to Berlin, and it made a really big splash. The most sensational club was Berghain; I spent a lot of time there, and heard many DJs play it on that system. Upstairs in the Panorama Bar as well. I haven’t focused solely on “euphoric” tracks in my career, but I have made a few and I am playing with that sound more and more recently. My newest LP, World Order Music, has a lot of euphoric content as well.

THE RECORD THAT WAS
A SPIRITUAL AWAKENING
Weather Report
“Palladium”
(Columbia, 1977)

This one is so damn uplifting; it really sounds like walking on clouds. I have been listening to it for decades and I love it as much now as the first afternoon I heard it.