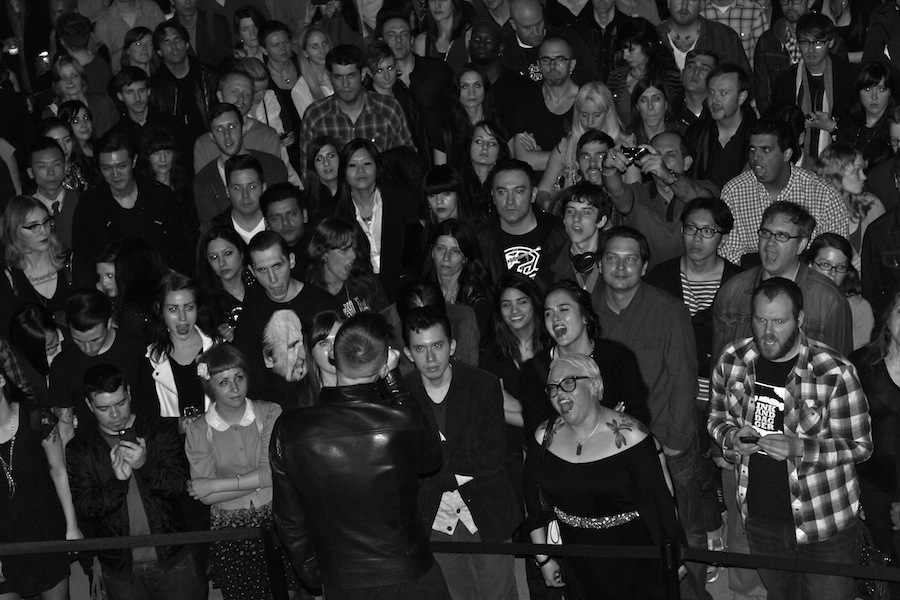 “There sure is a lot of black in here,” a friend said as we walked around the winding promenade of the Guggenheim and scanned the crowd that was clearly here to see Cold Cave and the steely sculptures of John Chamblerlain. Presented as part of the museum’s “Divine Ricochet” series, the pairing made perfect sense, as it dropped a floor full of genuine fans–many clutching free limited 7-inches–in the middle of a massive, posthumous Abstract Expressionism retrospective that recalled car wrecks and the sordid sexuality of J.G. Ballard’s Crash novel. Cold Cave’s core members (frontman Wesley Eisold, Dominick Fernow of Prurient and Vatican Shadow) responded in kind by setting the scene with waves of ambient noise that sparked many a blank stare and begged the question “are they just going to do this for an hour?”

Not quite. Eisold–a hardcore kid at heart beyond his austere exterior and leathered-up look–is too much of a showman to treat his cult following like a rehearsal space for one of his and Fernow’s painterly explorations of experimental electronic music. So as soon as the energy seemed to be sucked out of the room, it was re-upped by a relief-inducing rendition of Cold Cave’s breakthrough single, “Love Comes Close.”

The following 45 minutes veered between the purely visceral (the piston-powered “Burning Sage,” several industrial strength interludes) and the crowd-pleasing (“Underworld USA,” “Catacombs”). All of which seemed fitting given the group’s surroundings–several levels of molten, tortured metal and grown-up Goths–and the current pared-down version of Cold Cave’s ever-evolving live lineup. (They had a drummer the last time we saw them, which was a little more rock band and a little less modern art museum.)

Check out more photos from the night below, and our Cold Cave cover story from a few years back here… Previous VIDEO: Watch Nicolas Jaar’s Darkside Project Perform “Variations” and “Why Didn’t You Save Me” For MTV Hive & Yours Truly
Next LONG PLAYER OF THE DAY: Herbert, ‘Around the House’