NEEDLE EXCHANGE 150: An Exclusive Mix By… Ought 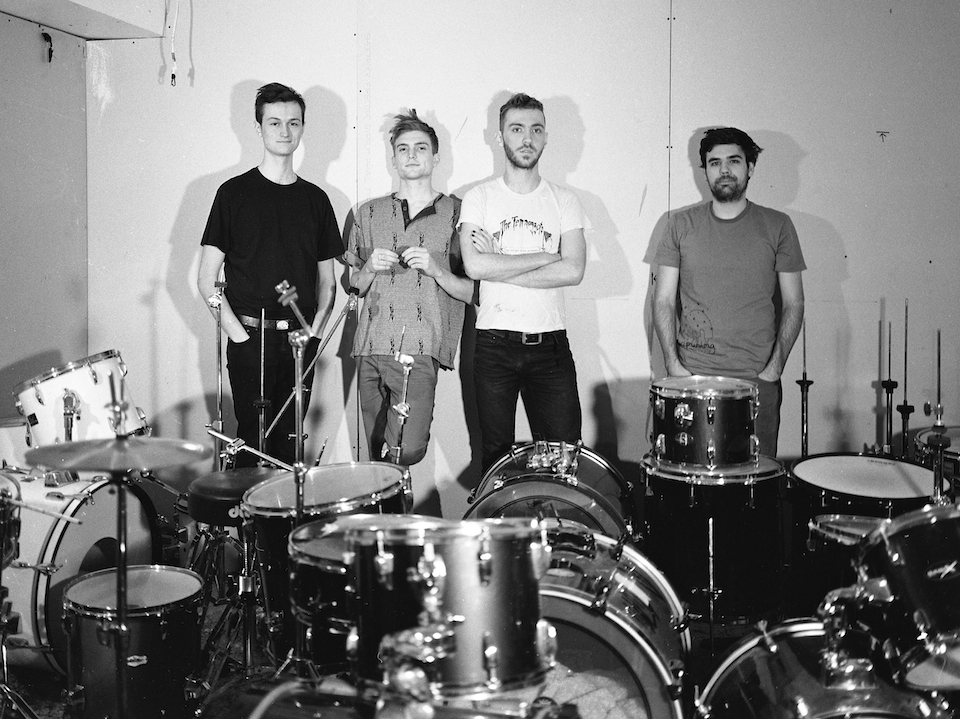 This week’s Needle Exchange mix started with a simple concept: letting Ought sort through the songs they actually listen to rather than the records their dizzying Constellation debut (More Than Any Other Day) has been compared to (standard post-punk fare like the Talking Heads and Gang of Four). They really went for it though, tearing through a tape that slides Robyn right in between Angel Haze and Kate Bush, and includes selections from Arvo Pärt, Magik Markers and Grouper.

Check out the full rundown below, and be sure to check and see if Ought is hitting your town this summer with another recent discovery of ours: Dub Thompson…

While the four of us exhibit a sometimes unhelpfully diverse taste in music, this mix is made up of songs we could all agree upon. This is the stuff that gets us through long drives, the songs that float through our collective consciousness while we’re writing new stuff. I guess a lot of it doesn’t really sound like us, but that’s really besides the point…

1. Magik Markers – Axis Mundi
That moment about 4 and half minutes in when it becomes dissonant and noisy and then the beat sneaks back in and the riff continues is inspired. We’ve played this in car on the way to probably every out of town show. Also, those vocals… come on.

2. The Clean – Drawing to a Hole
I always forget about The Clean until I really need them; Anthology is flawless.

3. The Mouthbreathers – Birthday
We’ve played with these guys a few times now. I think we scared them by knowing all the words to their songs. I managed to play it cool until they played but then my cover was blown in a big way.

4. Fakes – Insecure Bro
Ought BFFs slay everyone. “And they say you’re such a superstar/ You’re just a baby boy with a guitar/ You can do anything/ It doesn’t mean you should do everything.”

5. Mozart’s Sister – Don’t Leave It To Me
Tim Keen’s No. 1 iTunes most played, summer 2013. I could write an essay about the bass drum in this song; it’s insane. Mozart’s Sister is my white whale. I’ve been trying to see her for years and something keeps getting in the way.

6. Angel Haze (feat. Kool A.D.) – Jungle Fever
We typically play this when we have to get somewhere reasonably quickly. Kool A.D.’s verse is perfect, whip-smart, and Angel Haze is as good as ever.

7. Robyn – Hang With Me
Obviously.

8. Kate Bush – Waking The Witch
God, she’s so good. The production on this album just constantly floors me.

9. The Magnetic Fields – I Don’t Really Love You Any More
Just a summer pop anthem to get us through the day.

10. Porches. – Headsgiving
When Aaron Maine sings “it has happened beforeeeee” in reference to waking up and wanting to live and his voice cracks like he’s not quite sure and he’s counting on hearsay but also trying to convince someone else at the same time is truly devastating.

11. Femmaggots – New Here Too
More Ought BFFFLs, sadly departed but living on in so many other bands. This one’s a sad one. Swampy Swans-esque punk from eight of the best.

12. Grouper – Heavy Water/I’d Rather Be Sleeping
Liz Harris is one of Matt’s favorite musicians. It’s often put on in the more mellow moments of drives or hang outs, but can also be very warm in the right context.

13. Arvo Pärt – Fratres
This piece is the only thing that kept us alive in a two-hour Toronto traffic jam.