Read An Exclusive Interview With Roots In Heaven, the Secret Ambient Project of a Berlin DJ Who Shall Remain Nameless 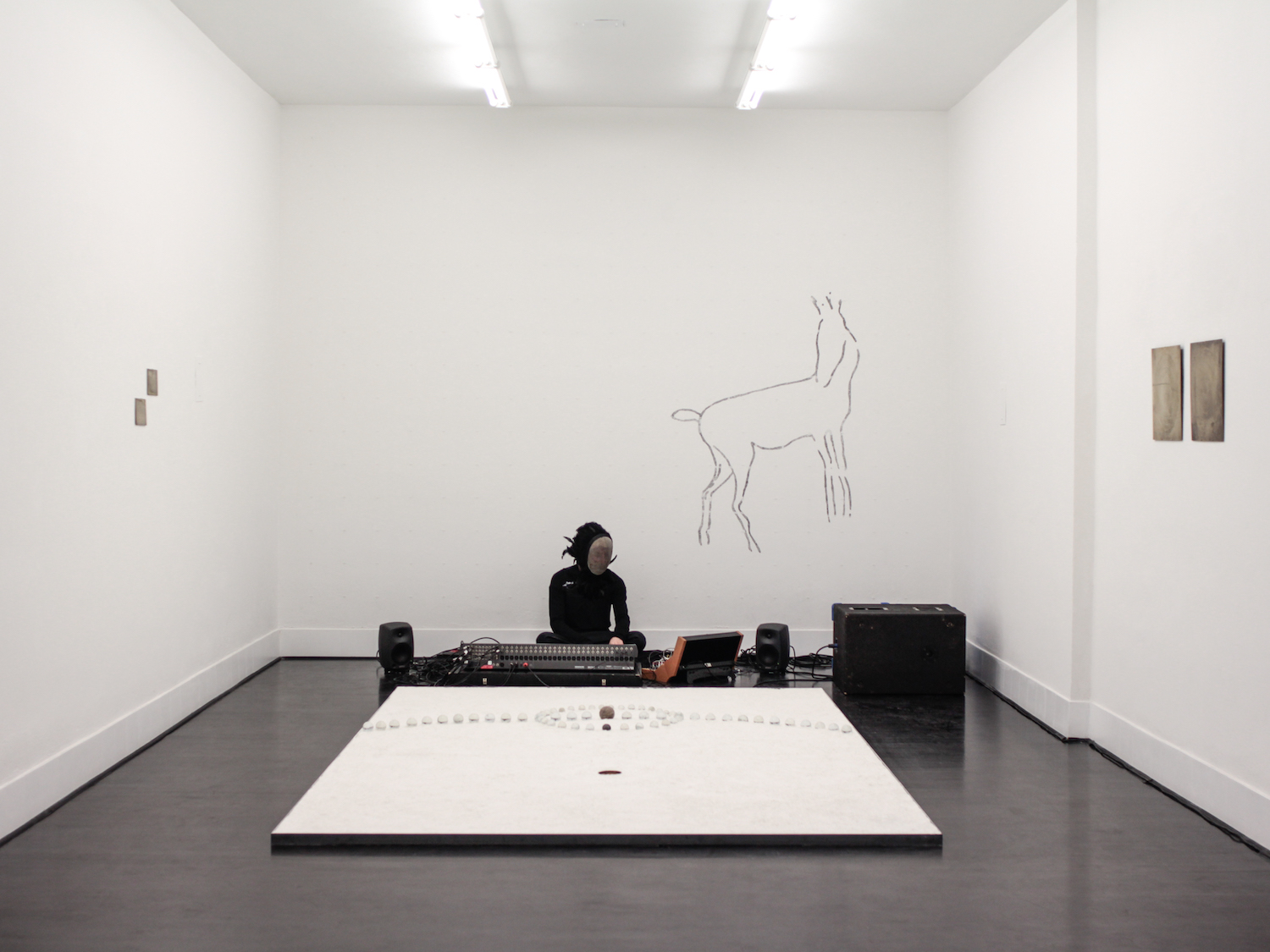 When Zehnin launched earlier this year, the label’s concept couldn’t have been clearer: “to encourage artists to step outside their comfort zone.” In the case of its first release, that meant having Stroboscopic Artefacts’ own Lucy embrace, and expand upon, the experimental side of his signature techno sound.

Zehnin’s last couple records have been sounded far more alien, however: the spacious, ambient splatter paintings of a secret producer named Roots In Heaven. We recently tracked him down and spent an hour unpacking the project, beginning with that mask.

“When I was much younger, I studied theater,” he explained, “and the teacher kept telling us to ‘fake it until you make it’. It’s a bit like that—the act of putting on a mask can be a statement: ‘I’m giving up my normal identity’. [Roots In Heaven] is a side of me that’s been asleep. Then it wakes up, and the other side of me goes to sleep as well.”

According to Zehnin, Roots In Heaven is “a Berlin-based act that could very easily capitalize on his past accomplishments within the world of electronic music. As a label owner, resident DJ at cutting-edge clubs, and accomplished solo artist behind a number of conceptually unique full-length albums, the conceiver of this project won’t likely need any introduction to the intrepid fans of electronic music.” With that in mind, we’re going to leave the small details of his origin story up to the imagination, and get right into the records—experimental shocks to the system that started in a gallery setting for a reason…. What are you up to today?
I just got into the studio, in Berlin.

You’re working on more new material already?
Yeah, I am. And I’m preparing for a show in Amsterdam with generative drone music, where it’ll run all night and people will sleep over.

Is everything you’re doing live with this project going to be more conceptual than a straight-up performance?
No, I’m just trying to keep the live performances limited to the right places, and the right kind of crowds. One of the main points of the project is there not being a difference between what happens performance wise, and what happens in the studio. It’s a more direct approach to improvisation; when people talk about improvisation in the electronic music scene, there’s an easy connection to randomness, which is what I’m trying to avoid with all my strength. I’m still trying to build these systems of sound generation in a way where harmonies respond properly to one another and I can play with dramatic scales. In a way, it’s like trying to fold certain archetypes of what you’re brain can recognize as music rather than just noise. That’s always been the magic of well-done ambient or drone music for me.

What’s a good example of that—music that resonates on a deeper level than simply being viewed as ‘experimental’?
One piece that was really influential on this project was Brian Eno’s I Dormienti, which actually translates to “The Sleepers.” It’s from a sculpture installation he worked on in London with this great Italian artist [Mimmo] Paladino. He created these sculptures of reclining, or sleeping, figures, and Eno put several sound systems in this big room—I think 10 or 12—that would run at different lengths. The whole thing was made so that certain harmonies would respond to one another. The record is an excerpt from it, but it’s an infinite piece, really, something that could go on forever. The music is unbelievably beautiful, too; it has an effect on you emotionally without becoming too intellectual.

Is this project something you were thinking of doing before the label approached you about it? Or did they just ask you if you had a more experimental side you wanted to explore freely?
The idea of the project came before [the label]. My main career is more in the dance music world. I wanted to expand upon the [experimental] elements that are more parenthetical to the techno I make. It’s a way to fulfill this two-sided relationship between ambient and dance music, of giving back to music that’s been a very important part of my life.

A person very close to me suggested being hidden, so I couldn’t rely on an established name. It could be a complete surprise, where people wouldn’t know who I was, and I could do whatever I wanted. That was extremely liberating. It’s nice to have an effect on people, even if they don’t know who’s performing in front of them. It could be nobody, you know? That gave me enough confidence to fully engage in something like this. The recording of my very first night is what ended up being the first album, actually.

So you didn’t edit it at all? It’s exactly what happened that first night?
Right, exactly. The only processing was the equalization and mastering. Again, the idea was to keep that connection between the live performance and the studio. There’s no post-editing at all in terms of arrangements and stuff like that. With my other, more well-known project, I’m used to very structured music, so it’s a good balance in general.

Was your EP done in the studio?
No, it was tied to a live performance as well. Actually, what happened is the EP was produced after the album. I was invited to soundtrack an art installation in Milan for Ignazio Mortellaro, one of the two people who are now responsible for the visual side of Roots In Heaven. Again, there’s no post-editing, just mastering and equalization.

Are all of the Roots in Heaven records going to be that way?
That’s a good question. I’m not sure, because I want to keep the project open to happenings. I don’t want to put any restraints on it. The only law is this idea of purity in a way; there’s nothing to lose. It’s different when music becomes your job. There was some interest in Roots In Heaven before the records even came out, which was very rewarding for me. But at the same time, I don’t want Roots In Heaven to become my main source of income. I want it to be really outside the typical realm of consuming music.

Are you still doing your day job?
Yeah. I wouldn’t even call it a day job; I tour a lot as a DJ. That’s my main activity in music, and it’s still fully going on.

Why keep your identity secret? Did you think there’d be too many preconceptions about what this is going to sound like if people knew who you are?
It’s not exactly like that. Even with my main project, I’m always trying to challenge the idea of what techno really means. It’s more about discipline, about putting myself in certain aesthetic restraints. And within those restraints, I can play around. That’s when interesting things happen, and the sense of randomness goes away. An example would be painters from the 19th century, and how things changed once Duchamp put two things together and called it “art”. It’s interesting to play with certain archetypes. The range of archetypes—of borders—with Roots In Heaven were too far away from my main project to be able to go very deep with it. Now I have all the space I need to do that. I have the will to make this a longer-running project.

How does the story of Proust’s madeleine play into your album?
I was reading it before my performance, but the connection came later, when I thought of [Roots In Heaven] as this memory process, where you can extend the sense of time infinitely.

What’s something that produced that madeleine effect on you in the past year?
During a meditation session, there was this clock in the room, ticking. And I became so focused on that sound that I couldn’t focus on the meditation itself. At some point, I got so deep into it where time seemed to slow down and I had this brain extension that was quite scary. It really took me out of the session. I kept thinking about it a few days later, and it started to remind me of something I read in the past—that Proust book [In Search of Lost Time].

You read the whole thing? (Ed. note: It’s seven volumes long and more than 4,000 pages)
Not the whole thing. I read some of the volumes since they can be viewed independently of one another.

When did the idea of having a mask come up?
It was more of a strategy in a way, so that people would view it as separate from the music I’ve done under a different name. Ignazio modified a fencing mask, with these really beautiful bird feathers around it. I really, really liked it because it’s not just a mask. It’s a meaningful object, made by someone with a certain intent and its own identity. When I put it on—like when I played at the No Bounds festival in the UK—I really feel like someone else. It’s someone that’s probably always been inside me, and it even changes the way in which I touch the synthesizers. Completely. It’s like I have new hands. That makes it extremely interesting to me.

So people really didn’t know what they were seeing?
Some understood [who I was], but then enough time passed between then and the launch of the project for people to forget the connection [laughs].

How do you see the sound of this project evolving over time?
It’s quite open for changes. I’m also open to collaborations. But for now, I’m still in the moment of taking the sound of the EP and the album even further. I want to see what it brings me, because it’s still a very wide open field. The meaning of ambient and experimental music is constantly changing, you know? It’s just names; what matters to me is keeping the integrity of this project. It’s less about the sound than the approach.

Is working on this project impacting your other work?
Not yet. As soon as I put the mask on, I get into a different mindset. Since that festival in Sheffield, I’ve started using the mask in the studio, too. It’s a reset point.

So it’s not just an aesthetic choice? It’s a head space you’re putting yourself in.
It’s a trigger for me and the crowd. But I know how social media works; eventually people will figure out who it is. For now, it’s about establishing a safe space of expression.

Did you reach a point with your other project where it felt like you hit a wall creatively?
I did, in a way. But it’s not about it being techno or not; it’s more about staying within the lines I established years ago. I didn’t want to give up, in a way. It’s like when you use a very old synthesizer; it’s pretty straightforward and limited, but what’s interesting is making the tool mine. It’s this sense of range. You have a limited range you can explore forever.