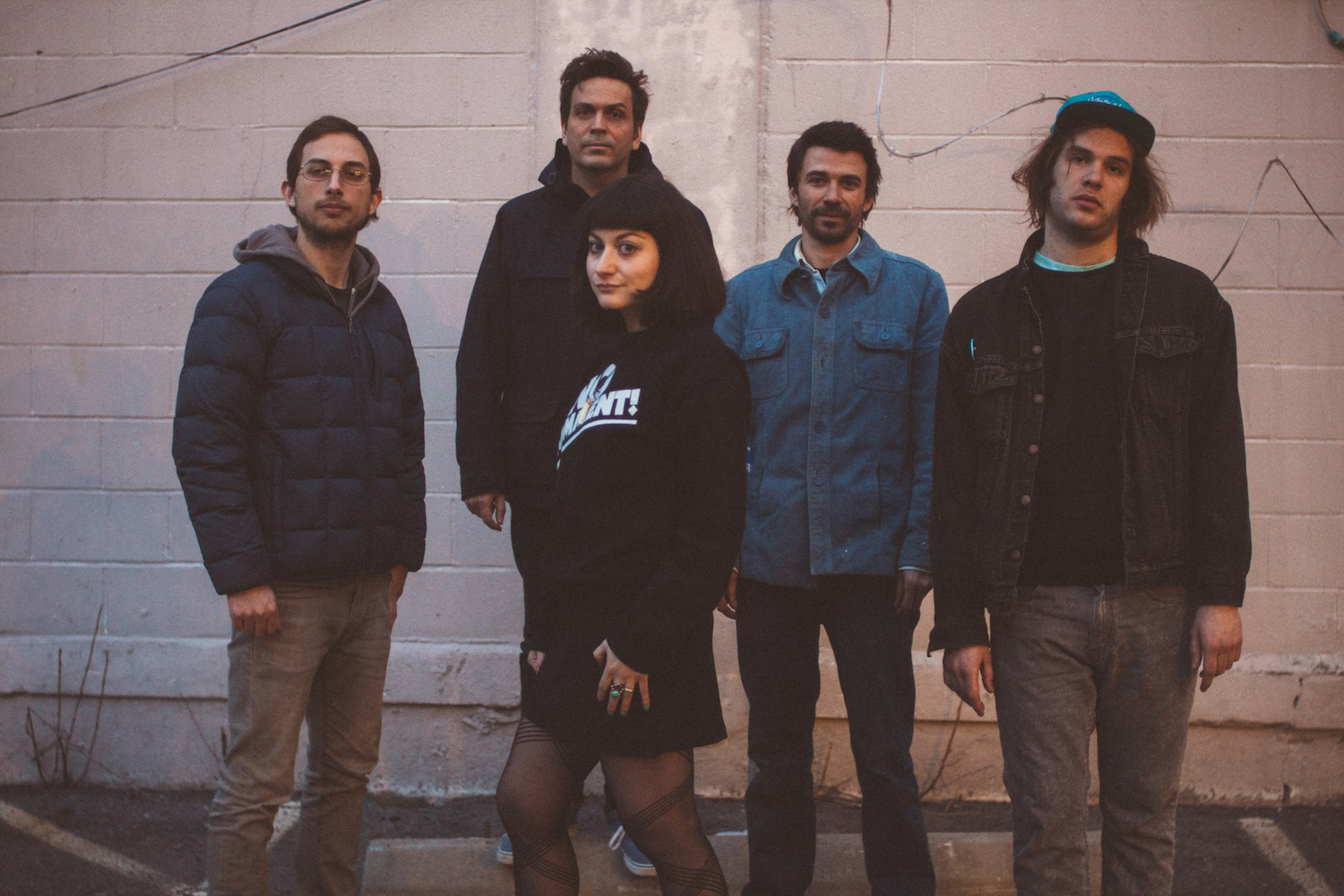 Having already tackled acid-drenched folk tracks (Volume One, Nice Dreams) and revved-up indie rock (Back To Soft) on their first three full-lengths, Coke Weed shift their focus to the ’70s on Mary Weaver. Namely the seminal art-rock songs of Bowie, Eno and Ferry, rounded out with hints of Debbie Harry and Nico.

In the following exclusive feature, guitarist Milan McAlevey shares the rather intense stories behind the songs on Mary Weaver right alongside an early stream of the album. Look out for a proper LP pressing through Beyond Beyond Is Beyond Records this Friday…

“MALOCCHIO”
After five years of writing for Nina’s voice, I started to get alright at it, so on Mary Weaver I wanted to give Nina more of a story to tell. So there’s a loose lyrical theme that can be oversimplified as “young woman in over her head”. I had revisited Beatrice Spark’s 1971 novel Go Ask Alice for the first time since high school, and I discovered how much that fake diary of a lost hippie girl was subconsciously informing the lyrics. “Malocchio” is a statement of purpose in which the young narrator describes her unstable mental health as an evil-eye curse, or the “malocchio” so famous in Italian folklore. As a band we were very much inspired by stuff like Bowie’s Station To Station, Roxy Music’s Siren, and Eno’s Another Green World—great examples of guitar-based rock band incorporating rhythmic elements of music that isn’t normally associated with the grungy pop we were playing in 2013. We actually nailed this song’s groove by listening to a lot of Some Girls by the Stones, which contains stuff like “Miss You,” which is straight-up disco. The jam at the end reflects how much we were listening to the William Onyeabor reissues that had recently been made available for the first time; we call this the “Afrobeat jam”.

“THE CHILL”
“The Chill” was most influenced by Bowie’s classic live ’70s band in his Thin White Duke period, with Carlos Alomar on rhythm guitar and George Murray on bass. I think they were listening to a lot of Chic. The harmony and the melody of the “The Chill”‘s verses are not so conventional and I love the way the vocal melody hangs off the chords. On the demo, Nina improvised her yelps on the downbeats in the choruses. We all loved that and arranged the song to better highlight it. The lyrics describe nothing more than a first heartbreak, except they go on to explore just how devastating and dangerous that experience can be to an emotionally unstable young person.

“PROVIDENCE”
Our attempt at a classic ’90s rap skit. It’s like eavesdropping on gangsters and I thought that would set up the drug crime subject matter of the next song.

“DEAD MAN WALKING”
One of my favorite all time songs is “I Want More” by CAN, which is really conventional for CAN and also sort of their only song that will destroy a dance floor. There’s only one “I Want More,” but I’m going to keep trying to write a worthy successor. In this case, it turns out to sound like if a nerdy indie band, instead of Chic, were behind Diana, Ms. Ross’s 1980 smash hit album. I had, um, heard stories of the old Lower East Side. The neighborhood was basically a giant, scary drug store until the late ’90s. I guess at one point one of the gangs had super-pure heroin which was branded by a stamp on the wax paper bags that said “Dead Man Walking.” This stuff had fiends losing their minds and getting hurt. Buying drugs on the LES back then must have been scary, but girls had a much easier time of it. This was because the corner kids were all boys and less suspicious that a young woman might be police.

“I COULD BE SO REAL”
An example of what a band snowed-in for six months in Bar Harbor can sound like when trying to hit a Bowie-esque Station To Station groove. The lyrics were inspired by a rich girl I dated in my early 20s. We were both total flakes, but I was in love, and I wanted more than anything for her to come down to earth and love me like I wanted. That never came to pass, except in this song.

“STREET SECRETS”
This is the only song on the album where I sing the lead vocal. When I was younger and serial dating, the crazier the girl, the more likely I was going to fall into painful infatuation. It was always a mess. “Street Secrets” closes out side one and offers the lone male perspective on the album by trying to describe how it felt to be in love in a situation where both people are too damaged to give much of anything that a real, lasting romance might be built upon. To me, it’s obvious that this song has Roxy Music damage all over it. “ALL THE SHADES”
We’ve always been into NEU!, particularly drummer Klaus Dinger’s famous motorik beak, or what he better described as “the long line.” We also noticed that every Creedence record would have at least one very long song that was just an extended hard choogle with no changes. The hypnotic fundamentals of both grooves, while coming from such different places, became one and the same for us. We ended up with a beat that feels like a 1000-yard stare into a blank desert horizon. The vibe was menacing from the get go, an evil/cool feeling that I’ve always ascribed to the end of the first Stones era, when they were arguably at their witchiest. Lyrically it’s the most harrowing song, as it addresses a very dangerous emotional breakdown, which is embellished by the fire imagery.

“SHORTEST NIGHT”
Another example of what a garage band snowed-in for six months in Bar Harbor can sound like when trying to pull some Portishead moves, which is silly, because those guys are better players than just about anyone alive. Still the chorus is heartbreaking every time, mostly because of Nina’s performance. The lyrics use a solar eclipse as a metaphor for the impossibility of a long-lasting, happy love.

“NEW JIVE”
Since we’ve been on this endless Bowie kick, we’ve been compelled to go to the well from which he drank. And what better place to start than the Stooges! It’s harder than it looks to write such an elemental riff. Luckily our drummer Pete can make his one tom sound like cannon fire. We added the handclaps at the very end. It’s another Lower East Side story: You could get in trouble if you copped from the wrong crew on certain blocks and they would chase you. That happened to a friend of mine, who ran and hid in a doorway that turned out to be the entrance to Save the Robots, an illegal house disco. That’s how we started going there every week and completely losing time. The party would always stop abruptly at 8 a.m., and you’d be ejected into the the morning light, which was always super rough. Crazy stuff happened at Save the Robots. My friend would get too high and inevitably rub up on the drag queens. One night we saw Bootsy Collins there. My buddy tried to rub up on Bootsy; it didn’t go well.

“HONKY TONK MAN”
This is a heavy drone vibe and live we play it slow as molasses. We’re all massive shoegaze fans and we wanted to try our hands at reproducing some of those textures in the studio. My rhythm guitar is going through four cranked Fender combo amps that were each in a different room. Lyrically it’s a bit different from the central Mary Weaver themes. I grew up in the country and taking LSD recreationally was something we did frequently as teens. There was a dude in our clique who was a straight up violent criminal. He gave us all really bad acid one night. I was having a horrible trip, but I was also seeing Pink Floyd: Live At Pompeii for the first time. It was so weird being so terrified and still loving and being blown away by that classic rock film. The night deteriorated after that and this bad dude basically made us get into his car in the middle of the night to get what? Better acid? I have no idea. None of us wanted to ride with him and we were all scared out of our minds.

“FLEECE”
The instrumental introduction to the final song. I guess I was allowed one minute, 15 seconds to indulge in some Spacemen 3 style psych-blues.

“DANDELION”
This song sounds most like our previous albums. It’s that vibe refined and done as well as we can. The Mazzy Star/Galaxie 500 comparisons might be inevitable. Lyrically it closes the Mary Weaver cycle on an ambivalent note. The narrator has made it through to the other side and she is bearing witness to the experience, but it’s not clear where she is or from where she’s singing. Did she make it, or is she just a memory? I myself don’t know; either way, it was a beautiful trip, and even though the album might describe an outlaw lifestyle, I still wanted to end the record by validating her experience no matter the outcome.