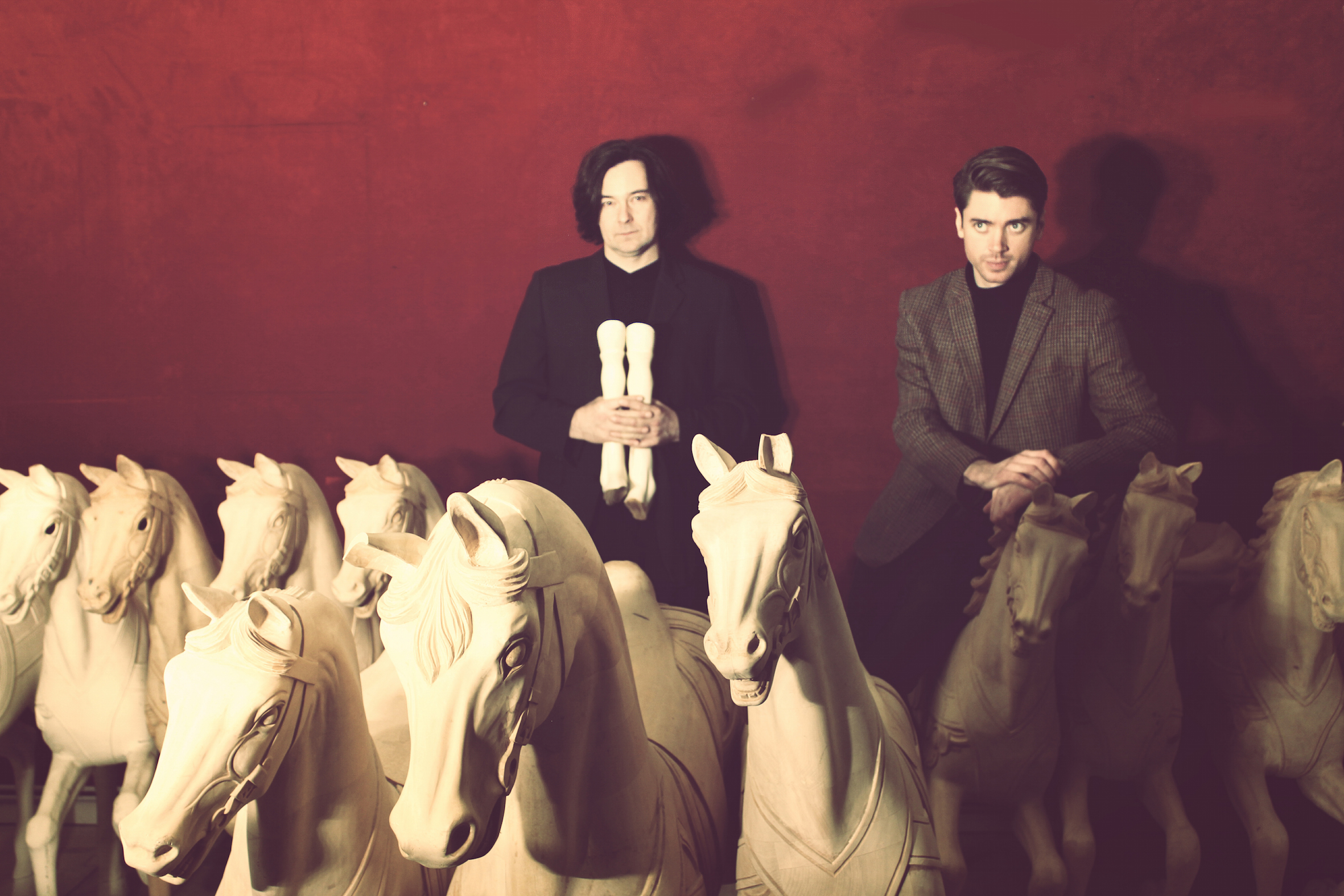 While Bureau B is best known for keeping Krautrock icons like Cluster and Faust alive, the Hamburg-based label signs its fair share of new artists as well. Die Wilde Jagd is one recent example that respects its elders—they have deep roots in other projects as well—while forging a fresh path of synth-laced “hunting music.”

Lose yourself in the duo’s groove-locked debut below, presented exclusively alongside a track-by-track commentary by Sebastian Lee Philipp (also of Noblesse Oblige). Further listening from Philipp’s fellow producer/multi-instrumentalist, Ralf Beck (Nalin & Kane), can also be found by digging through his decade-spanning discography here.

“WAH WAH WALLENSTEIN”
The track title is a combination of the infamous “wah wah” effect we used on the bass synthesizer line, and the bohemian warlord Albrecht von Wallenstein. We imagined this to be the soundtrack of Wallenstein putting his armor on, mounting his horse and galloping into the battlefield, swinging a large sword above his head. The amazing Dodo NKishi of Mouse On Mars played the drums.

“AUSTERLITZ”
Again, this is very much a song about a battle, hence we named it after one of the most important battles in European history—the battle of Austerlitz, during which Napoleon beat the Austrian and Russian army in 1805. I’ve always had a soft spot for medieval flutes and finally managed to use one in a song. Like the previous track, it features Dodo on drums.

“TORPEDOVOGEL”
Ralf always comes up with beautiful images when he talks about sounds and music. I can’t quite remember how we ended up calling the track “torpedo bird” but it must have had something to do with the sound of the bass resembling an accelerating motor boat about to launch a torpedo rocket, and a small flute my mum brought back from a trip to the black forest in Southern Germany. It makes the sound of a cuckoo. (You can hear it towards the end of the track!)

“DURCH DUNKLE TANNEN”
This was our first attempt at writing a song in the 3/4 time signature—somewhat new territory for both of us. The idea was to record a type of waltz with a Moog synthesizer, so the working title of this song was actually “Moogwalzer.” Our friend Detlef Weinrich (Kreidler/Tolouse Low Trax) wrote this beautiful poem in the style of dark German romanticism and we recorded him reciting it over the music.

“DER ELEKTRISCHE REITER”
This is the first track we ever recorded. Ralf just plugged my guitar into a bunch of vintage guitar pedals and asked me to start playing something over a Roland CR78 drum machine loop. Here we really developed our concept of repetition and growing dynamics. I was fascinated by the way Ralf would meticulously tweak every frequency and sound and use interesting effect combinations. This set the standard in our approach to making the record, which is very much a “studio album.”

“MORGENROT”
A lovers journey through a mystical forest. They lie amidst flowers and insects, watching unicorns walk by. They want to share beautiful moments together, until the hunting call at dawn wakes them up. German Romanticism all the way!

“JAGD AUF DEN HIRSCH”
My personal favorite on the album. It was inspired by the Greek myth of Diana, the goddess of hunting. Actaeon, a hunter, watched Diana and her nymph friends take a naked bath in a spring. Enraged by this, Diana transformed Actaeon into a stag, upon which he was hunted down and eaten alive by his own hounds, who didn’t recognize their mutated master. The track features some of the greatest synths ever built: the ARP 2600 and a Minimoog. We were also lucky enough to have Thomas Klein (Kreidler/Sølyst) playing drums on it for us.

“DER MEISTER”
“The Master” is probably the most melodic and structured track on our album. It features reversed vocals and a bass line from Ralf’s beloved Minimoog. In a way, this track is supposed to be both an ending and an introduction to a story. We hope that after the song finishes, one would want to put the record on one more time and perhaps it would all start to make a little more sense!