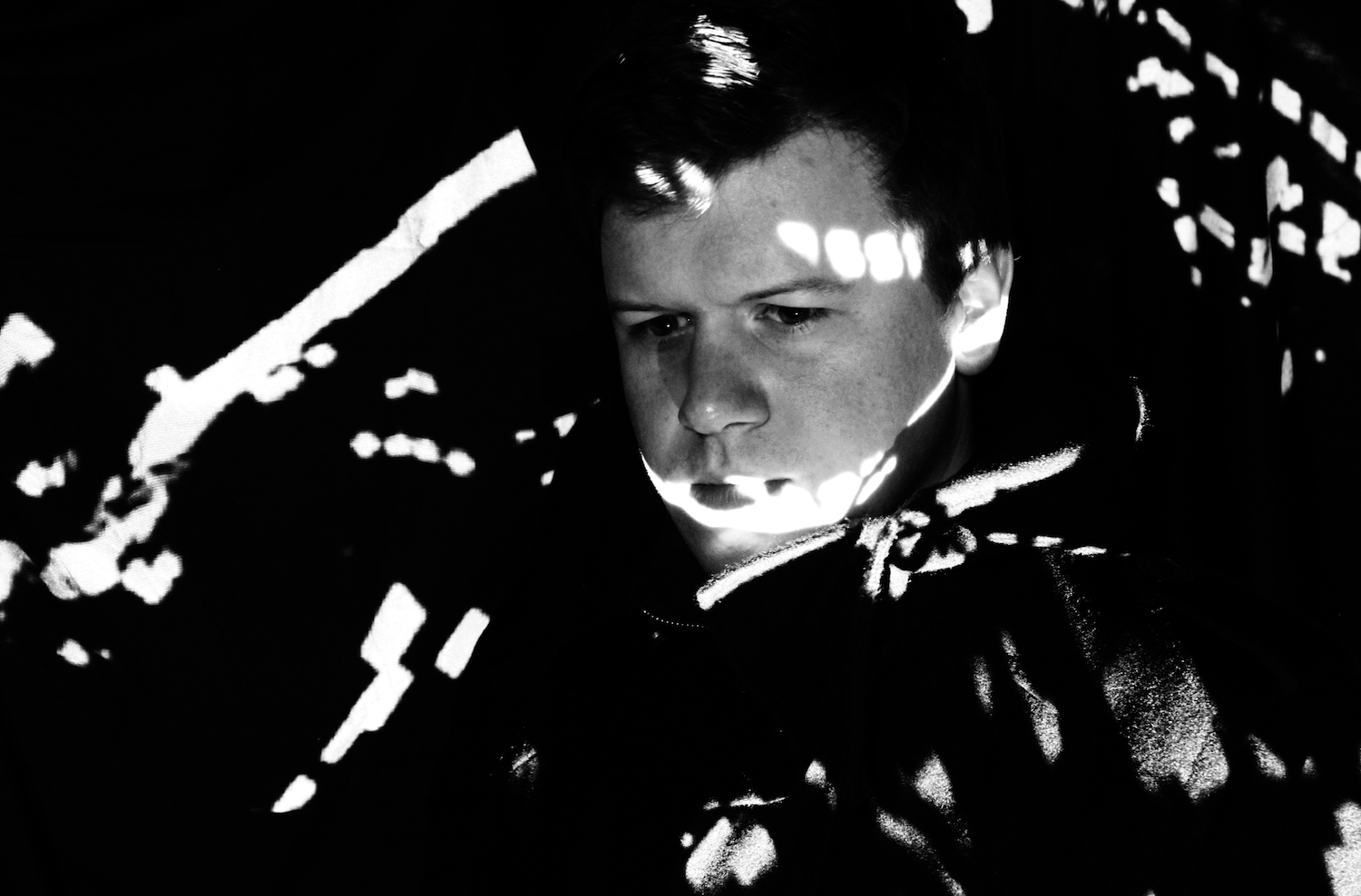 Hollowed started life as an experiment in recapturing the excitement and sense of wonder I had when I first started making music in my teens. The earliest sessions for the album were hours of improvised textures and sound design with electric guitar, effects pedals, a small collection of synths, and my voice. Pure experimentation with no fixed aim in sight. I was trying to escape rigid structure, or consideration of genre and allowing for serendipity to guide the process.

From this bank of recordings I sketched out a rough 20-minute suite which contained many elements of what would become the album. The pieces that directly stemmed from this early material were “Vacuum I” (there is also a “Vacuum” part II + III), “Reflection Through Destruction,” “Redeemer,” and “A Delicate Balance”…

“A DELICATE BALANCE”
Seeing a live concert of Górecki’s “Symphony No. 3” in early 2014 was one of the most moving live music experiences I’ve had to date. A beautiful composition evolving delicately from near silence over the course of 30 minutes, into a powerful and emotionally fraught crescendo before falling away again into silence.

I had begun work on the very early stages of what would become Hollowed and seeing this concert inspired me to reassess how I structured my music both in terms of arrangement and emotional progression.

I was very keen with this album to explore more spacious and dynamic arrangements and to be confident in taking my time to express an idea. “A Delicate Balance” and many of the other tracks were inspired by this.

“REDEEMER”
One of the earliest tracks I wrote for Hollowed. This track is like a wordless mantra setting the tone for the album. For me it juxtaposes both a feeling of claustrophobia and a sense of vastness.

“BEYOND SIGHT”
One of a few tracks that took a long time to finish and was originally about three or four separate compositions that I worked in together. There is an extended version that is about eight minutes long which I like very much; however in the context of the album it needed a tighter arrangement. For me this track is like a microcosm of the whole record, spanning many of the albums moods and emotions across six minutes.

“TERMINUS”
“Terminus” came about after returning from my tour of Japan in 2014. I had made a lot of field recordings whilst traveling around the country. Noise from the subway trains, crowd ambience in Tokyo, water dripping in bamboo forests, and bells in ancient temples. The backbone of the track was something I had been experimenting with for a while, but once I got back in the studio I started creating a mesh of sounds from these field recordings and it started to fall into place. This track is cold and aggressive, but I also needed it to feel like it was breathing.

“COBRA”
Without a doubt the heaviest and most aggressive sounding track on the album. Hence the name. “Cobra” bridges some of my previous work with where I was aiming to go with Hollowed. It is the only track that I played out at gigs before the album was released. So for everyone who came up to me asking what that track was over the past year or so, it was this one…

“NEX”
Originally part of the same track as “Vacuum I.” It feels twinned with “Redeemer” to me, but where “Redeemer” is human and organic, “Nex” is cold and mechanical. They both share a sense of unease and claustrophobia.

“MEMORY SHARD”
“Memory Shard” was created from reworking two old unreleased tracks I had made around four years ago. I love coming across old ideas that I’ve forgotten about and being inspired to make something new from them. It’s almost like collaborating with your former self. I truly believe that nothing is wasted when writing music, even if the majority never gets heard or is unfinished it is all a process you have to go through and you never know what you may end up coming back to years down the line.

“MURMUR”
Much of the drums and percussion on “Murmur” were recorded live and then mangled into their final state. Here’s a video of me experimenting with “Murmur” in the studio:

some space echo fun in the studio

“AQUAMARINE”
As with “Cobra,” this track shares some DNA with my earlier work. A lot of the melodic elements of this track are heavily processed guitar recordings.

“REFLECTION THROUGH DESTRUCTION”
The skeleton of this track came together the fastest of any on the album. It was pretty much just three live takes of bass, guitar, and synth lead. Whilst I do take a long time completing tracks, I find it’s always best to get the initial idea down as fast as is possible. Once the spirit of a idea is locked down, you can focus on the details for as long as you like.

“JENOVA”
One of my favorites on the album and the one I spent the longest crafting. It had many iterations and I kept returning to it over the course of about six months. There is a sister track to “Jenova” which I’m also very fond of that may see the light day at some point in the future.

“VESPER”
As with “Reflection…,” this track also came about very quickly. Created solely from my initial recording experiments it is mostly one live take.

“VACUUM I”
This was one of the first to properly take form and the piece that informed the entire album process for me. Once I had realized this I knew what the album would be and what I wanted to achieve. After many months of work on numerous tracks, it was the first thing I played to the label or anyone else and it gave me the confidence to move towards finishing the album.

‘Hollowed’ is now available through Planet Mu. Check out an exclusive Ital Tek mix and interview from a few records ago here.