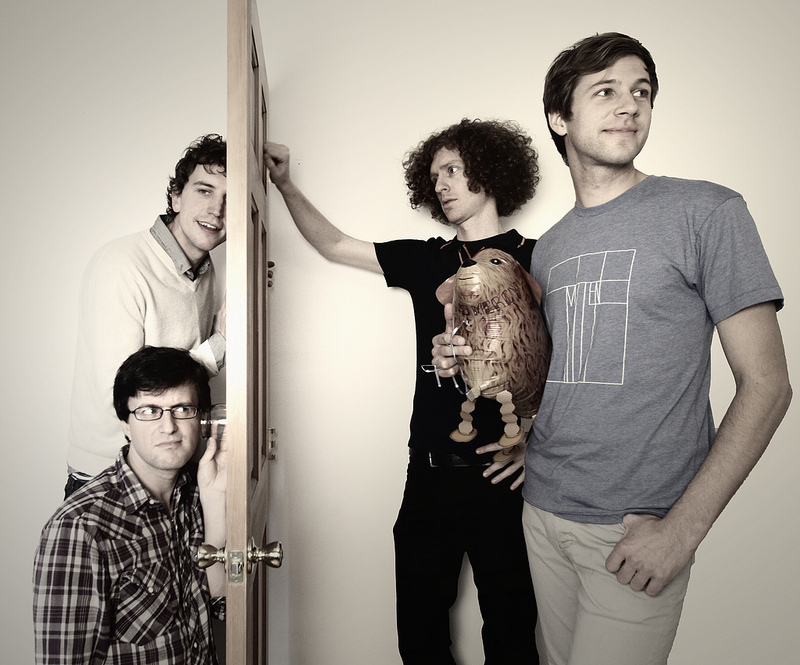 A week after Brent Knopf, the affable frontman of Ramona Falls, had finished mastering and mixing the band’s sophomore album Prophet, he went to have his first Tarot card reading. “She assessed me as ‘just floating along’,” he says of the reading, “Not really accomplishing anything.â€ Aside from the fact that it took the psychic six attempts to guess Knopf’s sign, there are other indicators of her being a fraud–if anything, Knopf and Ramona Falls are having an incredibly accomplished year.

After a decade spent as one-third of the Portland art-pop trio Menomena, Knopf left the band on the cusp of its breakthrough to pursue true artistic and creative fulfillment. And instead of lazying at home and lamenting over what some would consider a questionable career move, Knopf invested in his vision which culminated into the incredibly personal and oft-stirring Prophet.

Here’s a complete stream of the record, and the heavy stories behind each song, from the cruelness of our water world to the persistent need to hit E.T. up on Skype… So, we’re mostly water, right? Sixty-percent of the average human body, if what the internet says is true. (And it always is.) Babies when born are approximately 78-percent water, and four out of five humans live within 60 miles of the coast. We’re nourished by water; we’re drawn to water. And it can kill us. We can drown. We can be swept away in a tsunami. We can’t control when those events happen. Also, I think sometimes about animals in the desert and how they have to find fresh water. And sometimes there are predators waiting. There’s an inevitable cruelty to it. We try to be near things that replenish us, and in so doing place ourselves in danger. What of this risk can be mitigated? Can we cure this? Will it make us happier if we just accept it all and go with the flow? Yes. Until it strikes home. Then I want to cure it. I want to control it.

The beat is in phase and then suddenly reverses phase. (It becomes syncopated at 0:19, for example.) The bedrock shifts beneath my feet.

Recently I was awoken at 5 a.m. by the brightest light and the loudest sound. Lightning. Thunder. Basically no space between them. The next morning, news crews surrounded a tree that had been snapped in half by the blast. Just a few blocks away.

I’m someone who dreads the collapsing of many possibilities down into a singular, irreversible event. So sometimes there are moments when the universe branches. When a relationship will go one way or the other, and it will be forever changed. Sometimes time really does run out.

I wish I could do the Superman trick: fly around the earth opposite its rotation, and roll back time to change events. Or, failing that, I wish I could just freeze time by hopping in a plane that flies west forever, the sun never crosses the horizon, the day is never over.

Are we alone in the universe? That’s like having a billiard table the size of Iowa with only one cue ball shaped grain of dust on it. We musn’t be alone; it’s too depressing to think so. We’re too small. The universe is too vast. There’s gotta be more out there. I’m hoping the speed of light isn’t really the upper limit. â€˜Cause we gotta set up some Skype with E.T. one of these days, know what I’m saying?

I like the idea of someone refusing to feel lonely, despite how utterly alone they might actually be. It’s a form of rebellion. Maybe the person to whom you belong is just hiding. Maybe if you call out that the coast is clear, maybe they’ll show themselves. Maybe look for them in the darkest places.

I’m still struck by the Hubble telescope’s deep field space images. I love how daring it is. You think that’s the darkest region of space? You think there’s nothing there? You think it would be a terrible waste of an expensive resource to focus on nothing? Now look: it’s FULL of galaxies upon galaxies. Setting one’s course straight for the abyss as a leap of foolhardy faith–I love that spirit.

My friend once said that the implicit question in most of Kafka’s writing is â€œwhy not walk away?â€ In The Castle, I remember K seeking acceptance, inclusion, and understanding in the face of a impenetrable fortress of misdirects and bureaucratic obfuscation. Hey K: why subject yourself to this? Why don’t you walk away? Why subject yourself to this alienation? Why don’t you go somewhere else and create a new life for yourself?

The obvious adage here is: the Devil you know is better than the Devil you don’t know. Right? To divide by zero is to introduce a discontinuity in the graph. The answer becomes undefined. Broken. Infinite. Impossible to traverse.

The beginning of the song provides two options. Both lead to trouble. Trying to go down both alleys only makes things worse. Then, a wish expressed: to discontinue. The song collapses, muffled, asphyxiated like with a pillow. What emerges is a vision of freedom. Of walking away. â€œBrace for the open door.â€ How terrifying. â€œWhen you try to step outside you find the twine has binded (sic) your feet.â€ You’re tethered. You’re on a leash. The more slack you give it the more it takes, the â€œpoorer for itâ€ you are.

Archimedes Plutonium is the name of a science/scientist writer. I remember hearing stories about him working tirelessly on his theories about the universe. I admire this quality. I watch YouTube videos of people trying to finagle a perpetual motion machine with magents to create free energy. I love that they’re trying to supply the world with an endless supply of energy. I love that they go against conventional wisdom in the hopes of true discovery.

Before we dismiss anyone as a quack, we should remember that some of the same qualities that create extravagant failure might also create extravagant success. Every time I think about Isaac Newton, I’m confounded by the fact he spent half of his life in the futile pursuit of alchemy. Had he limited his field of study to alchemy alone, all of his life’s work would have been in vain. I wonder if Newton ever realized that half of his life’s energy was a waste : I wonder if had any premonition to which half would, in hindsight, be viewed as such.

Despite having the album’s cheesiest and, perhaps, most genuine line–â€œwhat I’d give if you’d feel my loveâ€–this song also expresses one of my deeply held beliefs. (Borrowed from Chomsky, by the way.) That false freedom is the ratification of pre-rigged choices, and true freedom is the agency to shape the choices themselves. The Coke/Pepsi challenge is, to me, a joke (as are many elections)–nearly identical products offered up as (a mockery up) democracy. The pre-constrained ‘choices’ implying/enforcing the spectrum of the acceptable.

Most of us present a facade of reasonability. We don’t talk too much about the irrational impulses, because we want to prune these away. Okay. So, you’re a grown up. You’ve learned to suppress (or at least hide) your urges. Do you hear the beacon? The signal? The signal telling you to quit your job? The morse code suggesting you ask her out on a date? The distress call demanding you jump out of the car and smash in the face of that tailgating jerk? Okay. So, you do a good job discerning which of these signals to tune out, which to amplify. You’re responsible, after all. And you put all of your energy and love behind an endeavor. (A marriage? A job? A band? A charity?) And it fails. Spectacularly. The love you thought was unconditional is gone. That whole â€œforeverâ€/â€œunconditionalâ€ thing was a lie. Now, quick. Gather your things, and redirect your affection/energy and try to believe it’s going to be different this time. Go through the motions. Fake it until you make it.

The story everyone tells themselves. If I were in charge, things would be different. I would be a beneficent dictator, you say.

The more untethered you are by limitations, the more you isolate yourself, the more selfish you seem. What value does anything have unless is connected/connecting with people? So you’ve invented the most beautiful language ever known, but no one can know i’s beautiful unless they also speak it. But they don’t. So it’s a waste. Who did you erase in order to pretend to have a blank slate?

The line between affection and suffocation is blurry. This is a meditation on the motivations behind coaching and pruning a loved one. Sure there’s a lot in this world to fear, a lot to protect against. Gravity. Sin. Wild Animals. But, in some ways, I wonder if the smotherer is not fearing for the smotheree, but rather for him/herself…afraid of the inevitable loss of identity (via aging/death/lost opportunity) and (unconsciously) trying to replicate that identity in another body.

How adept abusers can be at casting themselves as the victim.

In northern latitudes, the sun is to the south, and at noon, your shadow will point north. On the equator, at noon, you will be standing on your shadow. The sun will not collaborate with your shadow to give you a sense of direction. You’re on your own. What qualifies as enough evidence to make you move one way or the other? Ah, you played it safe again, didn’t you?

Many of the most depressing times in my life have been when I’ve felt I’m only treading water. A day’s toil earns me barely enough money to afford to live to toil another day. All you can do is maintain. Ambition is like a cruel crow scolding you, remembering your face. (Early in Menomena’s career, I lent the band money which we spent on PR, which accomplished absolutely nothing, and I had to put food on my credit card, the balance of which grew and grew, my food service job not paying enough to cover it.)

So I relate to, and despise, the notion of helplessness. I despise it because I know that we have to depend on ourselves, we can’t expect others to have our interests in mind. I’ll never forget the inadequate/corrupt responses of the people in charge (Katrina/Fukushima /BP Gulf oil spill).

But I relate to helplessness, too. If I were to get (for example) Multi-Drug Resistant Tuberclulosis, I would become utterly dependent on doctors. So I do hope for a cure to HIV (or cancer or alzheimers) even though I’m not personally researching it. I do hope for global nuclear disarmament. Sustainable energy. Universal literacy. Preservation of languages. Equal rights. All these things that, in 2012, seem quaint to say, almost as if to invite ridicule. It’s tricky, because it’s so easy to express a wish for something wonderful, and so difficult to make something wonderful that’s implementable for everyone else. So, the act of saying it almost immediately feels like lip-service.

This reminds me: Should one devote one’s life to following what one loves, or mitigating the nasty things that afflict us all?

Later in the song, I declare a stubborn belief in perfect symmetry and shapes, even in intractable situations. I do a handstand and notice all the mundane objects in my living room are floating at the ceiling like helium balloons.

Previous BREAKING: An Interview With … Kishi Bashi
Next LONG PLAYER OF THE DAY: Dixon, ‘Live at Robert Johnson (Vol. 8)’