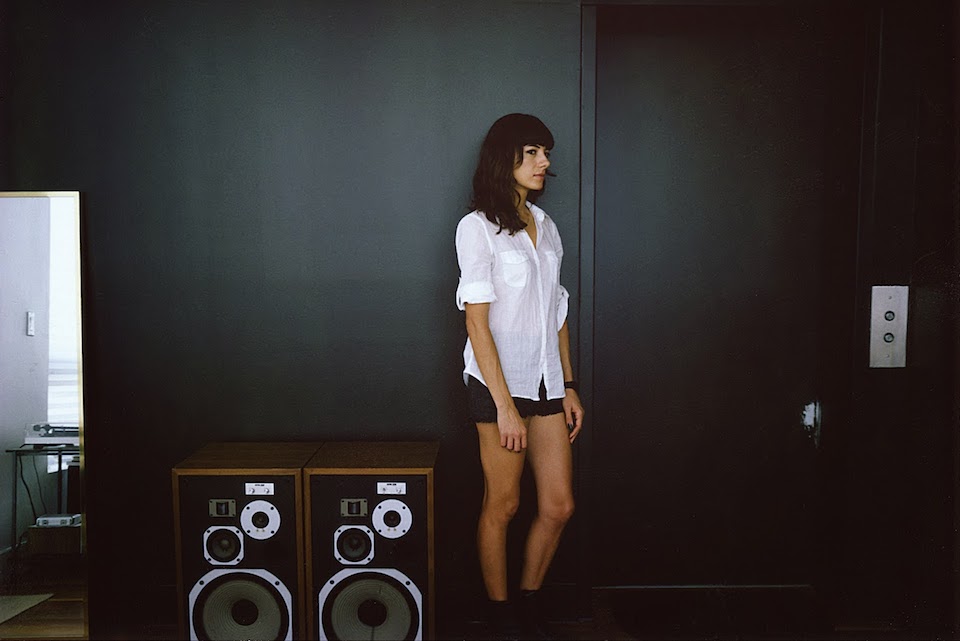 While we’re certainly psyched to present the first proper (and free!) headlining show of Memory Tapes this Saturday at Tribeca Grand, self-titled is just as jazzed about the opening DJ set of Minimal Wave founder Veronica Vasicka. And not just because there’ll be free vodka from 10-11. The real draw will be Vasicka’s unparalleled collection of rare cold/dark/new-wave records–the kind of synth-slinging cuts she’s personally reissued on Minimal Wave for the past five years.

Mostly to a cult audience, but that’s about to change, thanks in part to Stones Throw’s recent Minimal Wave Tapes compilation. Co-produced by Peanut Butter Wolf, it received a coveted “Best New Reissue” stamp from Pitchfork this week, who wrote, “One of the coolest things that Minimal Wave Tapes accomplishes is how nicely it frames the current synth-pop renaissance, reinforcing the idea that there’s room in the garage for sequencers and Korgs as well as guitars and drums…Thanks to the parallel lines being drawn by Vasicka and the good folks over at Stones Throw, we might not have to bother with all that crate-digging to enjoy and experience it.”

To give you an idea of just how carefully-curated Vasicka’s label is, we asked her to submit an exclusive “10 For 10” mix of cuts from the past, present and near future of Minimal Wave. She did much more than that, though. Consider the commentary that follows a neon-guided alternate history of ’80s electronic/new-wave music as well.

1. Autumn, “I Say You Hello”
Autumn was formed by Peter Bonne in Belgium in 1981. Like his other projects (Linear Movement, Twilight Ritual, A Split Second), Autumn had a strong cult following. On early cassette releases, many of the Autumn songs were in fact Linear Movement songs and vice versa. “I Say You Hello” was released in 1982 on the Not Afraid To Die cassette and will be included on a compilation of Autumn tracks later this year on Minimal Wave.

2. Das Ding, “Triffid Farm”
Das Ding is Danny Bosten, who was active in the early 1980s releasing his music and friends’ music via his own cassette label called Tear Apart Tapes. While studying graphic design in art school, he designed all the tape covers himself. Meanwhile, he recorded his own music as Das Ding. Powerful dark electro, some tracks are quite addictive and danceable while others are more for home listening. “Triffid Farm” is a spontaneous track which is a beautifully layered interlude; not necessarily danceable but contains the same energy as the rest. It recently came out on the H.S.T.A. LP.

3. Turquoise Days, “Blurred (single version)”
Hailing from Jersey in the Channel Islands, Turquoise Days was formed in 1981 by Luciano Brambilla and David Le Breton. Throughout the ’80s, they self-released many cassettes, as well as the renowned masterpiece Grey Skies/Blurred 7-inch. “Blurred” is the secret B-side hit, perfect for the dance floor. They were selected for the Radio Luxembourg song contest in 1985 and received a lot of press for their releases and appearance there. Their music can be described as melodic, emotive new wave.

4. Moderne, “Dilemma”
Moderne formed in Tours, France in 1979. The band consisted of GÃ©rard LÃ©vy, Thierry Teyssou, Bernard Guimond, Dominique Marchetti and their videographer Patrick Millerioux. “Dilemma” appeared on their second album, L’Espionne Aimait La Musique (which was reissued along with their first album by Minimal Wave in 2009). It was the track that most caught my attention early on. Each sound in this song can be heard distinctly due to the very high level quality of production. The two albums were mixed by Joschko Rudas and Henning Schmitz at Studio Rudas DÃ¼sseldorf, the studio Kraftwerk used for The Man-Machine in 1978. The production is exceptional; this is French new wave at its best!

5. Esplendor GeomÃ©trico, “MoscÃº EstÃ¡ Helado”
In 1977, after the collapse of the fascist dictatorship that ruled over Spain for 40 years, a huge change took place. Many artists started to explore and test the boundaries of their new sense of freedom. It was during this time that a group of artists from Madrid formed what would become one of the most influential electronic punk bands to have ever come out of Spain. That band of course is El Aviador Dro, which was shortened from their original name El Aviador Dro y Sus Obreros Especializados (translation: “The Pilot Dro and His Specialized Workers,” from the title of an Italian futurist opera). Some of the members disagreed on what purpose they wanted the band to have, and split off to form Esplendor GeomÃ©trico in 1978. “MoscÃº EstÃ¡ Helado” was one of the first songs to come out of this newly formed side project, which later evolved into quite an influential Spanish Industrial music band. The song was released on their first cassette, then in 1980 on a German compilation called Fix Planet, and recently on The Minimal Wave Tapes: Volume 1 compilation.

6. Ruins, “Fire”
Ruins were an electro-wave duo from Italy. They were arty and experimental and definitely not interested in joining the mainstream. They were interested in multimedia and had a strong visual aesthetic via their album art, videos and projections. “Fire” is super powerful. It’s where Italo meets Minimal Wave. It was first released as a 12-inch in 1982. I often play it out, and people go nuts. It has a great energy and beautiful production. This video is a must-see if you want to grasp the full effect of the song. (Editor’s note: We included the original and rare alternate version of the video above.)

7. Stereo, “Somewhere In the Night”
“Somewhere in the Night” was first released in 1982 by the French label Carrere. Then in 2008, it was released as a part of a compilation of Stereo material by Minimal Wave. Stereo is Bernie Adam and Thierry Noritop, who have been recording music together since they met in the early ’80s in France. They remained quite a mystery until several years ago. This ‘hit’ song “Somewhere In The Night” has a majestic, science fiction soundtrack vibe, with great vocoder vocals and Vangelis-style keyboards. This song, like the rest of their material, is very well-produced and could even have entered the mainstream alongside OMD and Depeche Mode in 1982.

8. Ohama, “My Time”
Tona Ohama grew up on a potato farm in Western Canada, and started making music in his teens.
This demo version of “My Time” appeared on an early cassette release, on a self-released 9-CD box set in 2006, and a studio version was released on the Ohama Meets Dania Love Only Lasts A While LP in 1986. The song has a laid back funky new wave sound, which only Ohama could pull off.

9. Deux, “Decadence”
Deux was formed by GÃ©rard Pelletier and Cati Tete in Lyon in the early ’80s. They made simple heartfelt electropop with male and female vocals. They are mostly known for their two 7-inch releases, Felicita/Game & Performance (1983) and Europe/Paris/Orly (1985). “Decadence” is from an old cassette of theirs and was only officially released by them in 2006. Look out for an album of remastered Deux material on Minimal Wave later this year.

10. In Aeternam Vale, “She’s Hard Time To Breathe”
Having made over 200 recordings, I.A.V. were one of the most prolific bands of the French underground scene. Headed by Laurent Prot and featuring Pascal Aubert, the band released many cassettes illustrated with Laurent’s wonderful collage work. Their sound is extremely original–overflowing with character and crossing between genres: electro, minimal, noise, and even garage.

As Douche Froide magazine wrote in 2002, “With the passing of time, In Aeternam Vale’s work remains astonishingly powerful, cold and caustic with its uncompromising minimalism, but also provocative and capable to smash your ass on the dance-floor.”

“She’s Hard Time To Breathe” is one of the softer, more innocent tracks–it sounds like Laurent is singing to a Casio waltz rhythm. It was recently released by Minimal Wave with other previously unreleased cassette recordings on a self-titled LP featuring a collage Laurent made in 1982.

Previous PRIMER: Blessure Grave’s ’13 Essential Gloom and Doom Albums’, From The Cure To Christian Death
Next NEEDLE EXCHANGE 006: An Exclusive Mix By … These Are Powers