Ekoplekz Breaks His Back Catalogue Down, Shares New Cassette Selection 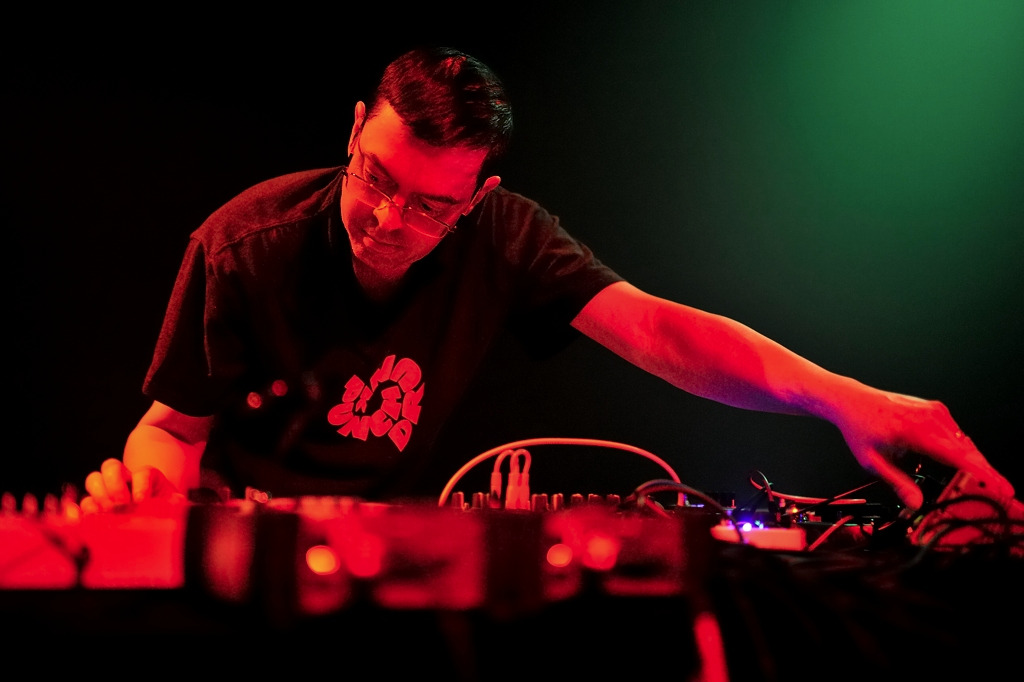 “The smooth, chocolatey warmth of high-end reel-to-reel tape is as much anethema to me as Pro Tools,” Nick Edwards once wrote in a Guardian essay about his raw Ekoplekz recordings. “Instead, I encourage tape hiss and electrical hum like a research chemist encourages mould cultures. Exploring the aesthetics of imperfection, those things that were once unavoidable and unsatisfactory, now creates pathways to the unexpected and the uncanny. Neither lo-fi nor hi-fi, it exists in some sideways dimension.”

Welcome to the terror dome, then: Cassettera, the Ekoplekz portion of a special holiday drop that also includes a limited Claude Speeed tape. In the following exclusive, Edwards shares a selection from the Planet Mu production, right alongside the reasons why he’s struggling to make sense of it all these days….

Your upcoming cassette is your fifth album for Planet Mu. How would you describe the records you’ve already done for them?
Well, Planet Mu were interested in signing me practically from the beginning—around 2011. There was a certain ‘pop’ sensibility in the music I was making then, even though it was very lo-fi and experimental, and they saw potential there. But at the time I wasn’t quite ready to make that leap to a big label so most of the material from that period was released by a smaller label called Mordant Music.

Also, I was a bit irritated that some people thought my music had a ‘pop’ element. I wanted to be seen as a serious experimental artist so after that my music got deliberately less accessible. I released some very uncompromising albums on Punch Drunk and Editions Mego which took my sound into much more difficult territory. I’m still pleased with that work, but after a while I guess I lightened-up a bit and went back to Planet Mu to see if they were still interested, which they were. So after about a year of recording and development I had quite a substantial amount of new material in a more accessible style, which became Unfidelity (2014) and Four Track Mind (2014).

They can be seen as two sides of the same coin. The tracks on Unfidelity were chosen by Mike Paradinas as the best selection to introduce my music to a wider audience. I think he did a good job; I was surprised how good those tracks sounded together in that sequence. It actually made me see my work in a different light. I would never have thought to put those particular tracks together in that order. Whereas Four Track Mind was like the ‘evil twin’; it was more the way I saw my music. The track “Ariel Grey” was written specifically to be an album opener, so I got my own way there! That album was released as a strictly limited numbered edition with less distribution or promotion… for hardcore fans only!

People have labeled Reflekionz your most accessible LP. What do you think?
I never really stop working on music, so there is never a clear boundary between what came before and after. I’m not always conscious at the time that the music is developing in any given way. It’s only when you take a step back and try to assess the material that you begin to see how its progressing.

With Reflekzionz, the selection was very much down to Mike again, although the general feel of ’90s electronica was something we both gradually noticed and it seemed like an interesting path to follow. sS that became the theme to work with, though never in a calculated way. I just allowed that influence to seep out a bit more which is why the album sounds like a hazy false memory rather than an overt homage. There are a lot of melodic synths drifting around in there, similar to that period of Artificial Intelligence-era Warp Records, and a lot less of the post-punk angular sounds which might be why a few listeners found it quite soothing.

Bioprodukt, on the other hand, has been called your most challenging record since signing to Planet Mu.
I wouldn’t say it was particularly challenging. In fact, the opening track, “Elevation,” is probably one of the most bouncy, uplifting things I’ve ever done! There was a return to some of the more scratchy guitar work of earlier records, but compared to, say, Intrusive Incidentalz or Plekzationz (from the pre-Mu years) it sounds like a pop record! Also the drum sounds are a lot cleaner and more upfront than ever before. I certainly wasn’t intending to challenge anything. I was just trying to make a contemporary electronic dance record with a bit of nostalgic flavouring that listeners of a similar persuasion could kick back and enjoy listening to. I guess it all came out wrong (again!). And now your next record’s a cassette-only release….
A lot of my core audience are the sort of people who like cassettes and I was conscious of the fact that I hadn’t released any new Ekoplekz tapes for several years. So I initially suggested to Mike that perhaps we could release Bioprodukt across all three formats. But it soon became clear that there was enough material for two separate albums, so the plan changed and the tape became a collection of moodier tracks that didn’t quite fit on the main album. The artwork is a monochrome version of the original Bioprodukt sleeve to reflect the darker, greyscale vibe of the music. That was my idea along with the somewhat off-hand, dismissive title, which I just like the sound of. But in fact this material is probably nearer to how the main album would’ve sounded if I’d been left to my own devices!

Can you tell us about “Seconds Too Soon”? Is it inspired by / a nod to Cabaret Voltaire?
Yes, well spotted! That one started as a basic rhythm track, using samples from the same drum machine that the Cabs used on the track “Seconds Too Late” back in 1980. Rather than sampling the original recording, I replicated it by loading the individual sounds (which I found on the net) into my Volca Sampler and programming it. Then of course i started messing about with it and it became something else, but the title remains a little nod to the initial inspiration.

How does living in Bristol impact and influence your work? What’s it like there now? Do you interact with other producers?
Being born and raised in Bristol, I guess I have a bit of that ‘bass culture’ mindset…. I’ve witnessed musical styles like dub, hip-hop, jungle, and dubstep evolve in unique,localized ways since my youth. But I’m getting on a bit now—I’m 48!—and to be honest, I’ve become a bit of a stay-at-home hermit in recent times. I wouldn’t say I had any connections within the current musical scene. My clubbing days are definitely over. I sometimes go to gigs, but usually stand alone in a dark corner with only a beer for company. I gave up smoking years ago and the smell of skunk everywhere gets on my nerves. I’d rather be in my studio just jamming away to myself. I still think I have lots more musical adventures ahead but its become a somewhat solitary pastime.

You’re super prolific as a producer. What’s your secret?
In terms of actual man hours spent working on music, I probably don’t spend that much more time than any other music-obsessed bedroom producer. But the fact that I only work with hardware and tape recorders means I’m not endlessly fiddling about tweaking and perfecting things. It all gets recorded quickly while the picture is right. It’s like being one of those artists who paint landscapes with watercolours. You have to get the painting done quickly before the light changes! What are you plans for 2018?
The short answer is I have none. Of course I’ll still be pottering about making music in my spare time but having effectively released two albums this year, I think it’ll probably be best if I keep a low profile for a while. As far as I can see the market is already saturated and it’s hard enough to shift records or get any media attention in the current climate. We all hear about the resurgence of vinyl sales, but its mainly classic rock and pop records that shift units. Marginal electronic music made by middle-aged white men isn’t really what most people want to hear or read about. Streaming is the big thing now but artists at my level have such minuscule playcounts its not even worth mentioning.

I know I’ve been pretty lucky to even get to the level I’m at now, but increasingly I find myself questioning the wisdom of trying to compete in the current market. My inclination is to get back where I started, on the DIY underground scene, just releasing homemade CDs or tapes in very limited numbers and selling direct to a small but committed audience. Kind of survivalist guerilla tactics. As the last track on Cassettera says, ‘The Outlook Is Bleak’, and I don’t really see that changing anytime soon.