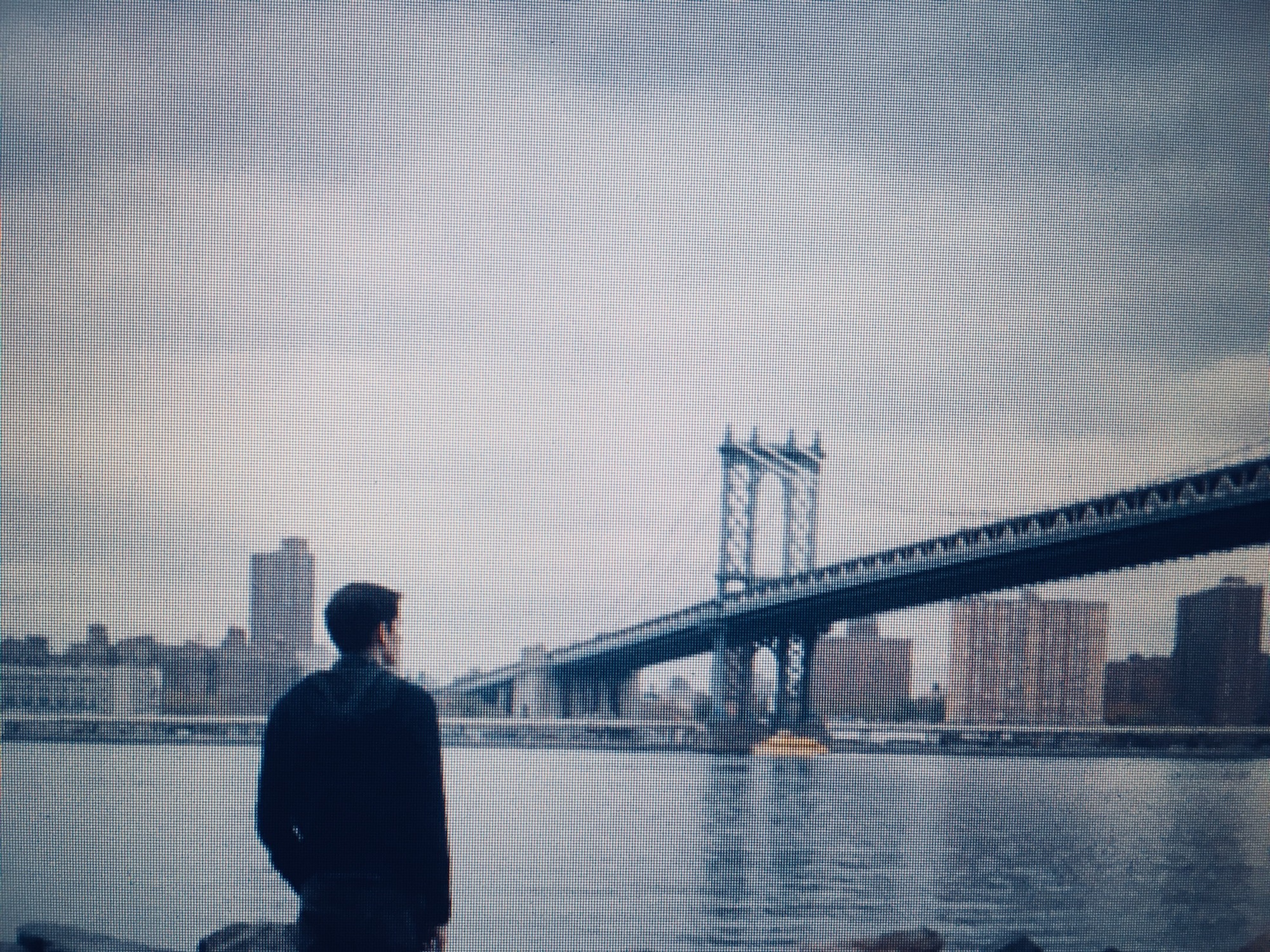 While we try not to have too much of an agenda in mind when it comes to interviews, s/t’s new 10 Questions series is as raw and uncut as it gets: a series of random, oft-unrelated prompts about pop culture, politics, and what it’s like being alive in the Facebook Age. Today’s subject is Kyle Bobby Dunn, a longtime favorite on the drone-or-die front who’s releasing a split LP stunner with Wayne Robert Thomas this week….

1. We’re now five months into 2018. Any thoughts on the year so far?
Won’t lie; it’s been bleak, but more eyeopening than ever before maybe. In some ways, things feel like they’ve permanently stagnated. In others, it’s like a very slow growth of some kind—a ‘New Grass’ kinda thing. Great [Talk Talk] song by the way.

I don’t know what to make of it all, really; I don’t think I am supposed to, or even allowed to.

2. Any opinion on Avengers: Infinity War or are you not really into the
newfound cultural currency of superhero movies?
Not aware of it or ever been into superhero movies or comic books. I don’t really follow the new Star Wars stuff either anymore, but I was always a fan of the original trilogy, especially A New Hope. That film never gets old in my opinion. I was actually thinking a lot about it during the recording of my new work—how it was inspired by John Ford’s The Searchers from 1956, which I sort of stole the suite’s name from.

We do seem to be in a state of ‘infinity war’, though, so I’m not really sure why we need anymore movies about it.

3. What’s one film score you wish you’d written—something that moved you as much as, if not more, than the images themselves did?
That’s pretty tough. On the topic of Star Wars, I have always loved the themes from that and most John Williams scores, actually. Ennio Morricone’s score for The Mission is deeply sad and moving to me but I’ve never seen the film.

I’ve been so moved by Western films over the years, and any film where the desert landscape plays a massive role. Throughout the ’80s and ’90s, there was such a great collection of good and bad road movies through the American desert, the Grand Canyon, and such. The soundtracks for most of those films still really pull at my heartstrings for some reason. I’ve never been to the desert before, but my mind goes there when I think of the beginning of time or possibly the end of it too. The gorgeous Ry Cooder soundtrack for Paris, Texas really works with the imagery brilliantly and I’ve always wanted to play a mean slide guitar like him….

4. Let’s say you’ve got someone special coming over for dinner; what are you making them?
Filet mignon marinated in Dijon mustard, Worcestershire sauce, soy sauce and minced garlic, with a side of Swiss chard or kale steamed in a wine wine vinegar, perhaps?

5. What’s one way you cope with the world’s seemingly endless news cycle? Is it all easy to ignore since you have Trudeau and we have Trump’s Twitter feed?
The obsession on all sides is truly horrifying and mesmerizing most of the time. I do have a hard time coping with how none of it is making sense or going anywhere on a daily basis outside of drinking a few beers most every night. I can’t believe how it’s been practically non-stop since late 2015, shortly before I was “fired” from a job and have been in a bleak place ever since.

I just despise all of it, honestly. I don’t think anyone is interested in helping the other out; it’s almost too far gone to do so. And most people just act like Trump, so it’s no wonder that he is President. People almost unconsciously relate to him. A lot of people in Canada are upset with Trudeau and Trump all at the same time. I don’t think there’s hope.

6. Us Americans can’t seem to take a joke these days (see: last weekend’s White House Correspondents Dinner). Meanwhile, your country has blessed us with the Kids in the Hall, Tom Green, Samantha Bee, and Tommy Chong. Why are you guys so damn funny and, us, so uptight? Should we blame the Puritans?
I mean history is what it is, right? Pretty bloody. I’m a Canadian citizen, but I grew up in the United States and took U.S. history in school, so I can’t be so shocked at this mess. It’s just the true nature of the country. There used to be students in my town, back in North Carolina, who would “joke” in classroom settings and places that if you didn’t like America you could “get out”. They’d say it in that gnarly deep Southern drawl and probably thought there was no harm in it. I think that’s the mentality with what’s going on and looming on both sides now.

Republicans have obviously been the worst thing for the country; that’s been clear for a long time now. But Democrats have not done enough in their power to build “walls” around them—and individuals like them—so it’s like the two have become different evils that everyone has to live with.

Maybe we can afford to be funnier because our health care is more affordable or free mostly? I feel bad for Americans—especially in the hardest hit areas, but even in the largest cities. (I’ve lived in both the rural South and major urban areas of America.) They are deeply impoverished, and surrounded by insane wealth—people who essentially concocted the mess they have to live with. People who don’t seem to care that it’s getting worse. Why should they? They started it.

Yeah—blame the Puritans, I guess. That scary scene in the disturbed orphan child movie Mikey, where he’s drawing a bloody turkey and Puritan, always stuck with me too. America has had a dark sense of humor for as long as I can remember, but when Trump arrived, it died and now where do you go?

7. Is Canada as divided about Big Issues—the economy, Hilary Clinton’s
emails, who wore it best at Coachella—as we are? Please say no; we’d
like a way out of this mess—an escape plan, if you will—when dude bro
starts aiming his “button” at the wrong person.
I’m in Montreal, and I believe there’s a lot of fucked-upness here and in the other bigger cities, too. A lot of people here seem caught up in the mess because, let’s face it, it’s causing widespread damage and will affect everyone. 8. What’s one thing America does better than Canada—something we can actually be proud of?
I spent a lot of time in my teens and young adult life in the States and I actually miss a lot of things about it. There’s so much beauty in both the countryside and city streets, really. One of my last great trips was to the Los Angeles area and driving up the coastline to a small town called Solvang. Seeing that wonderful city made me want to live there in almost an instant.

There’s amazing food in almost all corners of the country, too. Brilliant minds in the universities and professional worlds. Amazing nature and beauty almost every which way you go. Kind hearts and people who have fought, died, and struggled to live much harder than anywhere else in Western history…. America does a lot of things better than Canada when I think of it, and I am glad I spent some formative years there. I sort of want to live as an old man in the American desert if I ever get that old.

9. Do you think you’ll fight, welcome, or hide from our inevitable robot overlords?
I might fight it. But it looks like we failed with fighting computers; they are the overlords in many ways today. Nobody can do without it, ‘cept them lucky old people maybe.

10. Finally: Kanye West…. Misunderstood genius, consummate madman, or a little bit of both?
I have never been a fan of Kanye. Never liked his music or his messages or manipulations or whatever. I remember all these ads in a New York subway car one summer with Kanye hair styles or his face all over them and it just said ‘Be Kanye’. So he’s always been pretty fascist no? I’m not surprised at any longstanding friendship he might have with this Trump scum, either, because they are almost the same kind of person. Both just want to say or do anything that might keep them in the cesspool of media coverage or Twittersphere. I guess more of us are getting that way, too, because nobody shuts up about Trump or Kanye in the great but faltering West. Previous Alexis Taylor Makes Us a Mix of ‘Crackly’ Old Soul, Gospel and Folk Recordings
Next Arad’s The Glimpse EP Is Like a Lost Black Mirror Episode