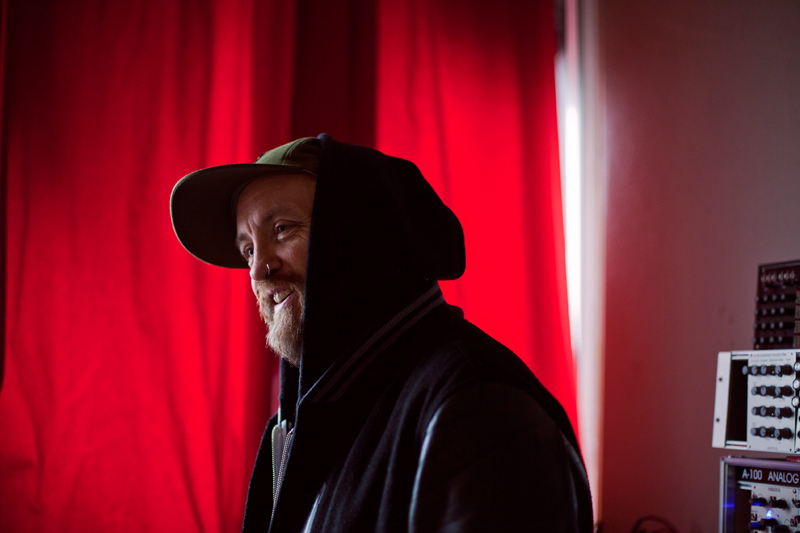 A little over two years ago, we interviewed several people on the periphery of Death Grips for a cover story we ultimately killed after they blew off an in-depth interview we had scheduled in Sacramento. One of the producers we talked to at the time was Kevin Martin, better known as The Bug, who’d asked the group to contribute to his long-gestating Angels & Devils LP. The not-quite-subtle result (“Fuck a Bitch”) speaks for itself, reflecting not just the trio’s own trademark sound but reminding us of Martin’s own bombastic hip-hop project with Justin Broadrick, Techno Animal.

Seeing as how Martin just released two more tracks from his new album (due out August 25th through Ninja Tune) today, we thought we’d share our original E-mail exchange in full since it posthumously addresses Death Grips’ creative process and gets into Angels & Devils as a whole, including that time Grouper played “Skeng” for her mom…

When did you first hear Death Grips and what was your first reaction to it?
I saw the video to “Guillotine,” laughed out loud at the sheer, glorious, gratuitousness of it, and was utterly blown away by the intensity and relentlessness of the molotov mix of vocals and sonics.

Given your background in so many different facets of electronic and experimental music, how did you feel like Death Grips fits into the scheme of things?
What I like most is the fact they don’t fit into the scheme of anything particularly. They are mighty mavericks who bravely fly the flag for the outsiders, the freaks, and the non-conformists. Viva the spirit of independent thought/action.

Did you dig Exmilitary because it felt like the group was onto something truly fresh and new, kinda in the same way that your music as the Bug is its own mutant, aggressive riff on dancehall and several other sub-genres?
I was smitten by the sheer uncompromising rawness, effortless originality and attitude. It seemed like a ferocious ball of feral energy which combined punk attitude with an open-ended, post-punk musical mandate, and thankfully was funky as a motherfucker. And like all the music I cherish most, it was exploding with fire in its belly. I really liked the fact it seemed to delight in tearing up musical rule books and burnt down genre divisions. It referenced the past with its blatant sampling, but set its sights directly to the future. And unlike the unlistenability that afflicts so much ‘extreme’ music, this was extremity that had max mobility, a sonic head-fuck that you could dance your ass off to.

Did you feel a deeper kinship to them as artists, both conceptually and musically, and is that why you wanted to work with them on a Bug track?
Yeah, most certainly. They invoked the non-aligned spirit that I felt was at the heart of Techno Animal, when we were collaborating with the likes of Dalek, El-P, Rubberoom, Anti-Pop Consortium, etc., years before. But I liked the fact they had this collective cabalistic methodology. They made a maximum impact with maximal ingredients. When we worked on Techno Animal’s Brotherhood of the Bomb we sought total exposure and craved the largest possible audience, but we weren’t in the right place at the right time and it didn’t help that the album was released a week after the destruction of the twin towers.

Bug wise, I guess the aim has always been to overwhelm people, and immerse a listener in my interpretation of the fucked up, chaotic nature of existence with all its clashes and contradictions. And I have always sought to infiltrate mind and body simultaneously. If dancehall was the starting point for me as The Bug, it was the fact that ai could extrapolate on that and reach a future unknown which made it so exiting for me, and I feel the same way about Death Grips; hip-hop is their foundation, but their destination is unpredictable and unknowable. Whilst so much music is contrived, industry led and sold as easily consumed/controlled, dumbly labelled product, Death Grips stand out as being compelling wild cards who set their own agenda.

Tell me when you first started talking to them about working together. Were they open to the idea right away, or a little leery of it because the project is so new?
Hilariously, they got back to me incredibly fast, and quoted the lyrics to “Skeng,” telling me it was a tour bus favorite. I was surprised, humbled and very pleased that they were so enthusiastic. I actually approached them totally blindly, as I had no real idea of who or what they were.

When did your track come together? Was it cut in the studio together, or by trading files?
It all came together about 18 months or so ago. I sent them a rhythm which they thankfully loved, and they set about editing it, and MC Ride added his fire and brimstone vocals to it. Ironically, I had originally wrote the rhythm for Roll Deep at their request, but they subsequently told me it was ‘too heavy’.

Did all three of the guys work on it?
They are covert regarding their maneuvers, even with their E-mails. They would send me collective responses, so the process was a mystery. But it’s called “Fuck A Bitch” and is suitably nasty, and thankfully pretty exhilarating. It’s a symphony for shattered and shattering glass, a celebration of collision and verbal confrontation.

Have you seen them live and met them in person since the track was made?
Yeah, I saw them live in London last year and was happily assaulted by their red hot energy. Was great to meet them face to face and get to know them better. They seemed like honest, genuine, balanced riot starters. Was great to witness them transform the typically stiff XOYO club into a mosh pit. And damn, Zach [Hill] hits those skins hard!

How has the rest of the Bug record come together?
The collabs have mostly been in my studio. The file sharing has been with DG and Grouper, but you know ‘file sharing’ sounds cold and detached, and whilst it is physically detached, the people I work with are eloquent, communicative artists, so I don’t feel it has been disadvantageous to work with them in such a manner. It was just geographically necessary.

Can you share more details about the making of some tracks from the new record?
It was funny mailing Grouper blindly—expecting a polite rejection or total ignorance of my music, but being met with an immediate blast of enthusiasm, and being informed that Liz had been playing “Skeng” to her mum in the car a week before receiving my mail. So many highlights working on this album… Witnessing Daddy Freddy’s second coming; Flowdan’s continual ongoing stone cold ascension; getting goosebumps from Gonjasufi’s Congos-like harmonies during a totally unscheduled midnight run to my studio; inviting JK Flesh to scream in full Godflesh style rage mode; discovering Miss Red in Israel by complete chance; getting reunited with Warrior Queen; etc, etc.

What are your long term plans for the Acid Ragga label? Will it be strictly 7-inches, or do you hope to put out albums through it eventually?
I am just genuinely, madly enthusiastic about the acid jazz concept/label/sound at the moment. Seems like the very beginning, and I’m loving working within the self-imposed parameters that I’ve set on the label’s sound. For now, strictly 7″, maybe an album compilation of the first 10 further down the line. And at the last few shows where we have been detonating the new sound, it’s been amazing to see/feel such an incredible reaction from the audiences. It’s a maddeningly exciting sound/concept for me at present.